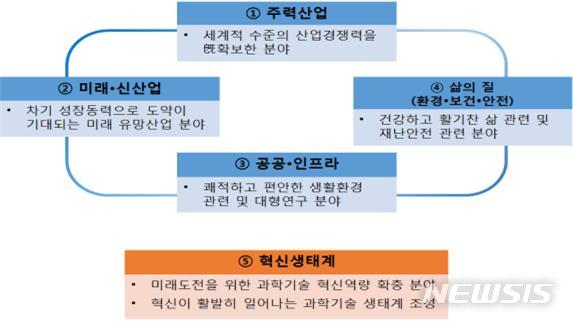 The government will endeavor to put the private investment in charge of key industries including semiconductor, display, automobiles, communications, broadcasting, and network. The government, instead, plans to invest more heavily on securing original technologies on which the private sector had limits in actively attracting investment.

Its plan includes the expansion of the foundation for future, new industries encompassing robot, content, big data, and AI along with active institutional improvement efforts. For the areas where private investment is already strong, support will be provided to expand the industrial foundation, while reinforcing a package-type investment which connects R&D and institutional improvement.

With regard to the sectors concerning the quality of life such as the bio and medical industries, the government plans to take charge of investment. But for the public service area in need of sophistication, the government plans to make investment that is conducive to creating the ecosystem of private-public cooperation. In particular, the areas greatly affecting people's lives such as fine dust and marine pollution, investment will be concentrated on problem resolution.

Lim Dae-sik, Vice Minister for Science, Technology and Innovation, said "the government investment has driven Korea's economic growth so far, but we need to make strategic investment through cooperation and role distribution between the private sector and government going forward," emphasizing that "science and technology, having been focused on economic development, will expand its role to improving quality of life as it touches on every part of people's daily lives".