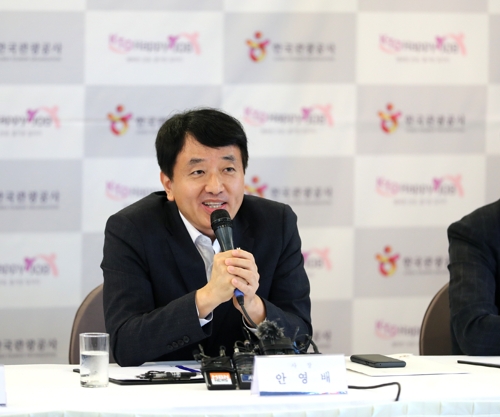 President Ahn had a luncheon in a restaurant in Jung-gu, Seoul, where he said "we made some achievements last year with foreign tourists excluding Chinese exceeding the 10 million mark. However, the deficit was widening due to disappointing record in our main markets such as China and Japan, and rapidly increasing overseas trip by Koreans".

He declared that "we will make Korea as a tourist destination re-visited by foreigners," suggesting to stabilize main markets like China and Japan, develop new emerging markets including new Southern (Southeast Asia and ASEAN), new Northern markets (Russia and other Eurasian countries), and attract value-added tourists such as medical and MICE tourists.

He explained that KTO will launch a campaign to expand demand for local tourism and diversify local-specific content such as DMZ peace and ecotourism content.

It will also improve tourism infrastructure in local airports and implement consulting on competitive edges of local governments' tourism across the nation.

He also mentioned that "we will make every effort to create tourism jobs," adding that KTO will support, by utilizing crowdfunding investment system, tourism companies attract investment, and set up more local tourism support centers to act as bases for local tourism innovation.

Regarding questions about North Korean tourism, he maintained principled position saying that "we need to wait and see South and North Korea's agreement, but we expect reopening of it once Geumgang tours resume".