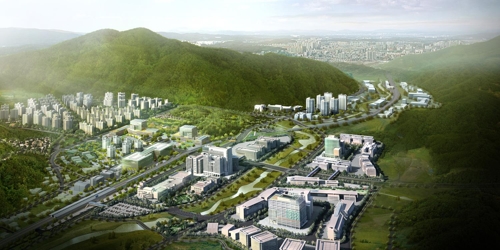 (YANGJU=Yonhap News) A project to set up "Yangju Techno Valley", a high-tech industrial park driven by Gyeonggi province and Yangju city, is expected to begin construction in 2022.

This agreement contains work scope and expense sharing between the three parties.

Gyeonggi province will be in charge of project planning, handling license, attracting domestic and foreign companies, and operating working-group.

Yangju city will finance 37% of total expenses, implement the administrative procedures of licensing, install infrastructure and bear the charges to reduce development cost of Techno Valley.

Gyeonggi Urban Innovation Corporation will finance 63% of total expenses and be in charge of construction work including detailed design, site development construction, compensation, and lotting-out of site.

Companies of the textile, fashion, electrical and electronics industries are to move in.

The three parties plan to request Ministry of the Interior and Safety to conduct central investment examination in April-June. If its result signals positive signs, they will begin site development construction in 2022 after going through administrative procedures.

An official from Yangju city said, "We plan to attract high-tech enterprises, high-skilled talent and large-scale investment, thereby contributing to improving quality of life for local residents and building a happy city".