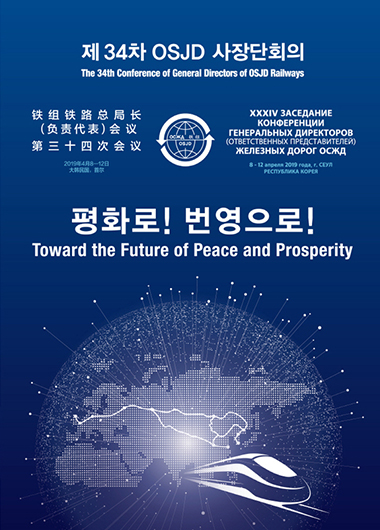 South Korea next month will host an annual meeting of the Organization for Cooperation between Railways (OSJD) general directors from Eastern Europe and Central and Northeast Asia that will discuss the seamless connection of the regions through railways.

The OSJD is an intergovernmental organization with 29 member countries from Eastern Europe, and Central and Northeast Asia formed to discuss cooperation on improving passenger and freight transportation between Europe and Asia by building cross-regional railways such as the Trans-Siberian Railroad and the Trans-China Railway.

Korail joined the organization as an affiliated enterprise in March 2014 and then kept up efforts to become a regular member state. It had failed to win unanimous approval from existing members due to opposition from North Korea, which has been an existing member of the organization, but finally succeeded in obtaining the vote in June last year.

Under the slogan of “Toward the Future of Peace and Prosperity,” 300 government officials, railway experts and business leaders from 27 countries including Russia, China, Mongolia and Poland will visit Seoul to attend the meeting.

Korail is planning to use the conference as an opportunity to prove its competitive edge in railroad technology.

By Choi Hee-seok and Lee Ha-yeon