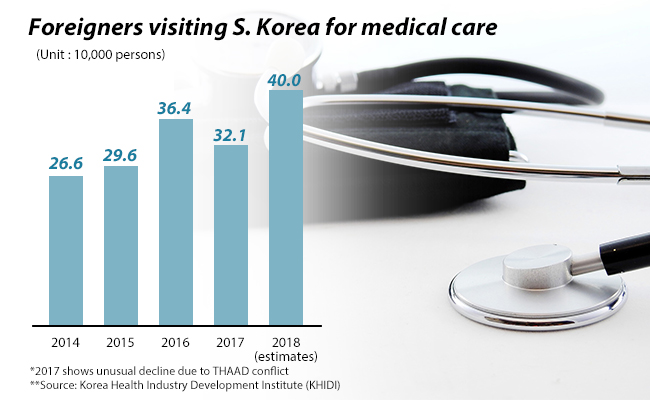 The South Korean medical tourism industry is cheering an influx of foreign patients in recent years, with the number of inpatients and outpatients from across the world jumping over 20 percent a year in a decade.

In 2017, the number showed a sudden decline to 321,574 patients due to the diplomatic row between Seoul and Beijing over Korea’s decision to install the U.S. Terminal High Altitude Area Defense (THAAD) anti-missile system on its soil. But the following year saw a strong rebound, nearing 400,000 partly thanks to thawed relations between the two neighboring countries.

According to government data, the number of Chinese people who visited South Korea last month soared 48.1 percent on-year to 510,000, the highest level since March 2017 when China began to take retaliatory action against THAAD deployment.

On top of a growing number of foreign patients from other nations who are visiting Korea for high-quality medical services, the rising number of Chinese tourists to Korea could lead to boosting sales in Korea’s medical industry, the industry experts expected.

By Seo Jin-woo and Minu Kim