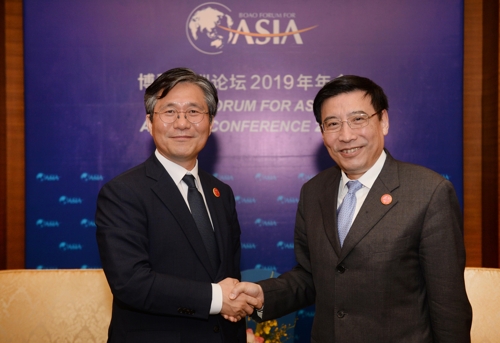 Industry Minister Sung Yun-mo, currently in China to take part in the Boao Forum for Asia, met Miao Wei, head of China's Ministry of Industry and Information Technology, on Thursday. The two agreed that Seoul and Beijing need to strengthen cooperation to brace for the fourth industrial revolution.

During the meeting held in Boao in China's Hainan Province, Sung said South Korea and China can have a mutually beneficial relationship in the next-generation automobile industry, including hydrogen cars, suggesting the two should join forces in establishing a global hydrogen supply network.

Sung also expressed hope that foreign carmakers can engage in fair competition with local players in China in the electric vehicle segment after the Chinese government plans to stop handing out subsidies in 2021.

The South Korean minister also urged China to make a fair and reasonable decision on the on-going anti-dumping probe on South Korean chips, as well as in its review on Hyundai Heavy Industries Co.'s purchase of Daewoo Shipbuilding & Marine Engineering Co.

The two ministers agreed that South Korea and China have made a significant achievement in seeking growth, especially through the manufacturing segment, and claimed they should continue to seek cooperation in other areas.

Sung met business leaders from both countries at the forum, where he also introduced South Korea's industry strategies, including on self-driving cars and smart factories using the fifth-generation network.