More than half of Koreans turn to simple online solutions for shopping
Date
2019.04.19
Views
382 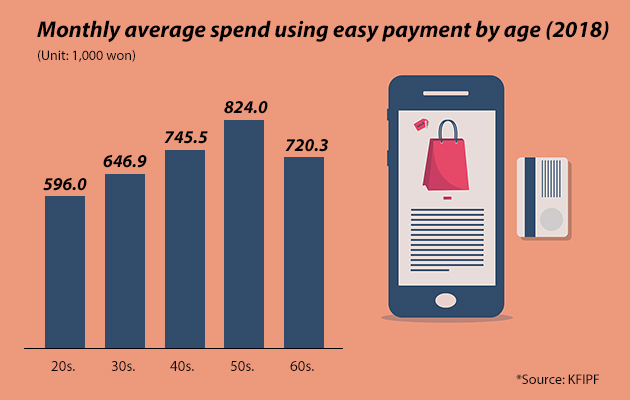 A survey released by Korea Financial Investors Protection Foundation on Wednesday showed that 56.8 percent of Korean adults use simple online payment solutions for purchases and transactions, up from 51.7 percent the previous year.

The country’s notoriously archaic banking security system has long been a source of frustration for Koreans and foreigners alike. Users would have to download a slew of cybersecurity programs and pass through a labyrinthine process of identity checks – from username and password to online digital certificates, one-time passwords and sometimes text message and phone call confirmations – for every online transaction.

Last year, the government vowed to do away with the cumbersome digital certification system, triggering a rapid shift among banks, card companies and payment platforms towards more simplified security software.

The most commonly used easy payment method was credit card apps, answered by 77.2 percent of the respondents. Payment platforms including Kakao Pay and Naver Pay followed with 66.4 percent, trailed by retailer services (51.5 percent) and manufacturer and mobile carrier services (38 percent).

By Chung Joo-won and Kim Hyo-jin