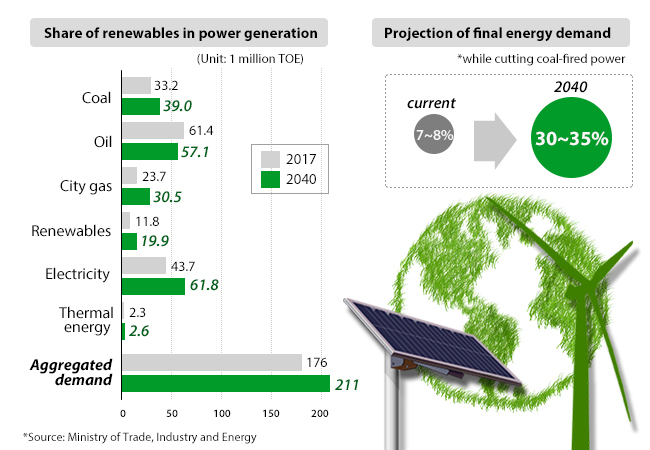 The South Korean government aims to increase the share of renewable energy in power generation from the current 7 to 8 percent to at least 30 percent by 2040, and significantly cut coal-fired power supply under its eco-friendly energy drive.

The Ministry of Trade, Industry and Energy announced a draft of the third national energy plan on Friday, the energy-related master plan for the mid- to long-term that come out every five years.

Under the goal of promoting sustainable growth and enhancing people’s qualify of life, the government picked five agendas to purse from 2019 to 2040 with keystone in the dramatic cut in the share of coal-fueled power and a proportional increase in renewables in the energy mix to 30 to 35 percent by 2040. The target is in line with recommendation from a task force consisting of renewable energy experts in February.

The task force said it came up with the figure based on the renewable energy expansion plan of the Organization of Economic and Cooperation and Development (OECD), the progress of the government’s Renewable Energy 3020 Plan aiming to raise renewable energy share to 20 percent by 2030 and possible setbacks that could be caused by uncertainty and volatility of renewable sources. Although the target is lower than the International Energy Agency (IEA)’s projection of renewables making up 40 percent of the global power mix by 2040, the 30 to 35 percent goal is ambitious for Korea considering its current share of renewables at 7.6 percent in total power output.

In February, the Korea Energy Economics Institute (KEEI) suggested the need to set a bold goal to raise the share of renewables in power generation to above 30 percent to keep pace with the global target and improve competitiveness of the nation’s renewable energy industry.

Currently, biofuels account for the largest share of renewable electricity production, but the government is expected to focus on increasing power generation from solar and wind sources. In accordance with its goal to improve air quality and greenhouse gas emissions, it will significantly cut power generation from coal by shutting down aged coal-fired power stations ahead of schedule and stop adding new ones.


By Lim Sung-hyun and Choi Mira