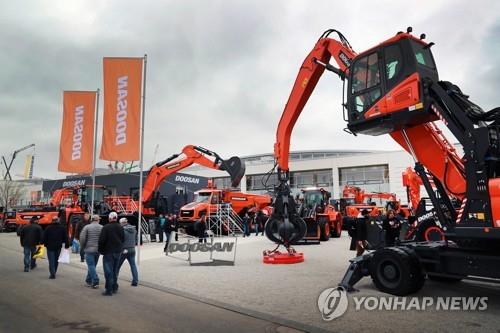 Doosan Infracore said its first-quarter sales from the two regions reached some 200 billion won (US$175 million) combined, up 14 percent from a year earlier.

"We believe this is a result of our aggressive sales tactic in accordance with the market recovery in North American and European regions," the company said in a statement.

Doosan Infracore said it beefed up customer support programs and expanded dealerships in the two regions to boost sales. The company added that it is also looking to establish a "customization center" so that it can swiftly execute customers' needs in the North American and European markets.

"We're on course to achieve 840 billion won in annual sales in these markets," it said.

The North American and European markets are Doosan's core markets after China. The company also aims to raise revenue from China by 5 percent in 2019. Last year, Doosan Infracore had 1.4 trillion won in sales in the world's second-largest economy.