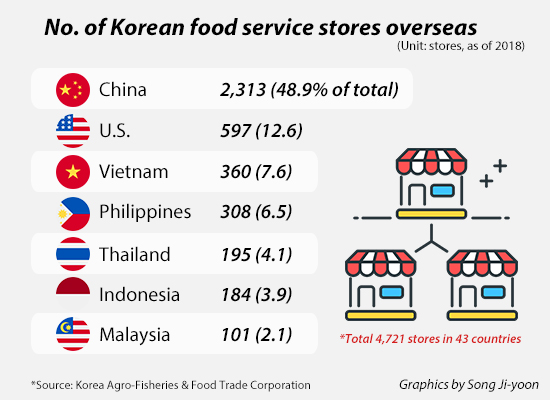 South Korean food and beverage (F&B) companies are aggressively seeking for new opportunities in overseas markets as the local F&B industry is saturated.

According to a report released by Korea Agro-Fisheries & Food Trade Corporation on Monday, 166 Korean food service companies were operating combined 4,721 stores under 184 brands in overseas markets as of the end of last year. They accounted for 7 percent of the country’s total F&B businesses.

By country, 92 companies were operating in China, 61 in the United States, and 34 in Vietnam.

The total number of Korean F&B outlets in China reached 2,313, accounting for 48.9 percent of the total Korean eateries overseas despite the Korea-China diplomatic row over Seoul’s deployment of a U.S. anti-missile system that has forced many Korean companies to exit from China. There were 597 stores (12.6 percent) operating in the U.S., 360 stores (7.6 percent) in Vietnam, 308 stores (6.5 percent) in the Philippines, and 195 stores (4.1 percent) in Thailand.

The report showed that Korean food services companies expanded not only in size but also in revenue.

Industry insiders noted that the country’s saturated F&B market is forcing more Korean F&B companies to seek to go global. The report showed that 92 companies are hoping to enter overseas markets, of which 30.4 percent plan to do so this year and 59.5 percent next year. Vietnam was the most popular destination chosen by 43 percent of the companies. China came in second with 27.8 percent.


By Lee Duk-joo and Lee Eun-joo