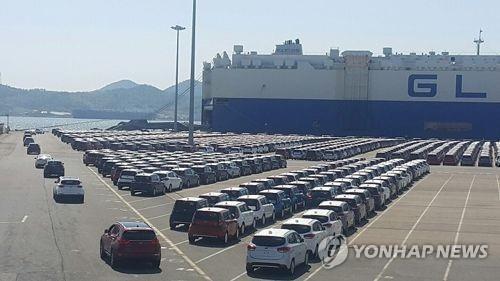 (SEJONG=Yonhap News) South Korean-made passenger car exports rose 2.7 percent in the first quarter of the year from a year earlier due to strong demand from the United States and for eco-friendly cars, customs data showed Friday.

Local carmakers shipped passenger cars worth a combined US$9.3 billion during the January-March period, compared with $9.1 billion a year earlier, according to the data compiled by the Korea Customs Service (KCS).

In terms of units, Hyundai Motor Co. and other smaller rivals exported 590,000 passenger cars in total during the cited period, down from 600,000 a year earlier, the data showed.

The U.S. is the largest market for South Korean passenger cars, accounting for 37.5 percent of South Korea's total car exports in the first quarter, up from 33.8 percent tallied a year earlier.

Passenger car exports to France and Australia fell 19 percent and 5.9 percent, respectively, in the first quarter of 2019 from the year before, according to the data.

The data also showed that exports of eco-friendly cars reached $1.26 billion in the first quarter, up 33.8 percent on-year.

The average export price stood at $15,650 in the January-March period, also rising 2.7 percent from a year earlier, the data showed.

Meanwhile, the country imported a total of 65,000 foreign passenger cars in the first quarter, down 19.3 percent from a year earlier. In terms of value, the imports dropped 20.1 percent on-year to $2.4 billion, data showed.