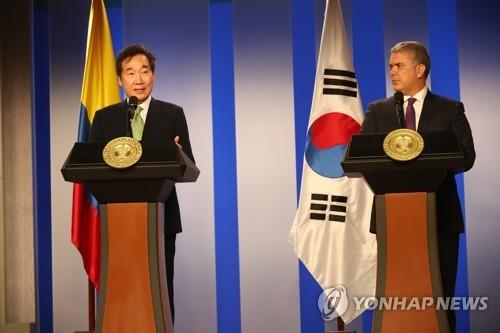 (BOGOTA=Yonhap News) South Korea and Colombia agreed to expand bilateral cooperation in the fields of information and communication technology (ICT) and infrastructure construction in a top-level meeting here on Monday.

Lee, who arrived in the Colombian capital on Saturday for a three-day visit, and Duque held one-on-one and expanded talks for an unusually long two hours and 40 minutes before attending a joint press conference to announce their agreement to further upgrade bilateral relations.

Lee's rare talks with the president of a foreign country were originally scheduled to last 70 minutes. Lee is the first South Korean prime minister to visit Colombia in 37 years.

Duque said at the news conference that the potential for economic cooperation between Colombia and South Korea, an ICT powerhouse, is very enormous because his government is pursuing the so-called Orange Economy, which promotes industries utilizing ICT.

In response, Lee said South Korea will explore ways to share its experience and technology with Colombia as the country seeks to reinforce its ICT infrastructure in preparation for the Fourth Industrial Revolution.

"President Duque explained his government's plan to build various facilities in the Medellin region in preparation for the Fourth Industrial Revolution. In this regard, South Korea will seek various ways to share its advanced ICT, including 5G, with Colombia," the prime minister said.

Lee expressed his wish that South Korean companies will be able to take part in Bogota's subway, sewage treatment plant and other infrastructure projects.

The two countries agreed to push for a Colombian investment promotion mission to visit South Korea in October to hold intensive discussions on expanding two-way cooperation in ICT, infrastructure and renewable energy.

The two countries also agreed in principle to hold a joint conference on establishing a bilateral free trade agreement during the Colombian mission's visit to Seoul.

Earlier, Lee met with a group of Colombian war veterans who fought in the 1950-53 Korean War. Colombia was the only South American nation that sent its troops to fight in the Korean War. Of its 5,314 soldiers, 213 died or went missing and 567 were injured.

After the visit to Colombia, Lee was to leave for Ecuador on Monday for a meeting with President Lenin Moreno.

Lee's trip is part of the Seoul government's efforts to expand diplomacy with Central and South America.