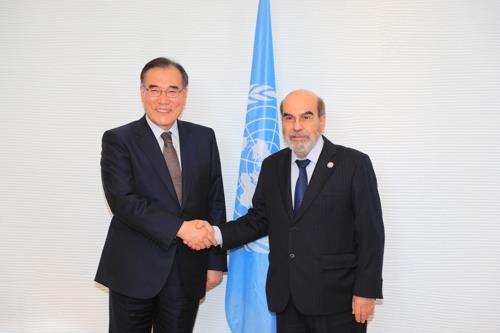 (SEOUL=Yonhap News) The U.N. Food and Agriculture Organization (FAO) opened a liaison office in South Korea on Monday to play a greater role in global food-related projects and promote global movements against famine and poverty.

The office will center on rolling out joint projects to cope with poverty and food security issues, along with sharing agricultural know-how with developing countries, according to the Ministry of Agriculture, Food and Rural Affairs.

"The ministry and the FAO started discussing opening the office in 2013," Agriculture Minister Lee Gae-ho said in a press release to celebrate the opening of the FAO office here. "The two sides will strengthen cooperation so that the shared expertise and leadership can contribute to global food security."

The Seoul office will officially begin operations during the latter half of this year after completing preparation work, such as the hiring of staff, the ministry said.

The Seoul-based FAO office will also help pave the way for South Korea to share its technologies and agricultural know-how with developing countries, and to join forces with related international organizations, the ministry said.

The ministry said South Korea wishes to play larger roles in fighting poverty and malnutrition around the globe through the office.