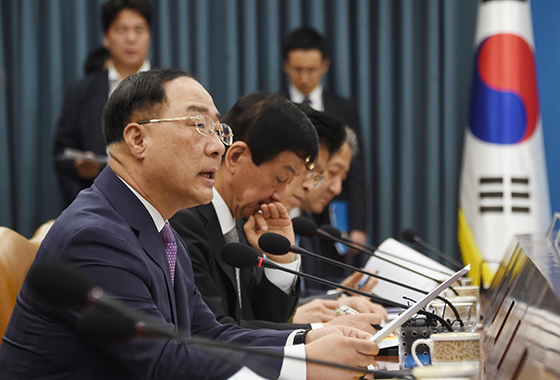 The South Korean government will foster the biohealth sector to become as big and competitive as semiconductors through strategic promotion, deputy prime minister and finance minister Hong Nam-ki said.

“The government is outlining a comprehensive outline with a focus on research and development, deregulation, and assistance to marketing and market entry,” said Hong while presiding an economic ministerial meeting Wednesday.

The biohealth industry is projected to expand at an average annual rate of 5.4 percent to become a $10 trillion market worldwide by 2022, Hong said. “We plan to gather more ideas from today’s meeting and finalize policy discussions to announce the plan soon,” he added.

Social infrastructure was another topic on the Wednesday agenda. Hong urged local governments and related organizations to expedite the approval process for infrastructure spending in the first half as this year’s infrastructure budget has been raised by 2.8 trillion won ($2.35 billion) from the previous year. He also called for more active use of policies that allow for early budget execution as the 6.7 trillion won supplementary budget bill is still pending in parliament.

Hong also shared government plans to promote marine tourism. Under the initiative, the country would be divided into seven districts, with select hubs chosen for focused tourism development. There were also talks of grooming Korea’s many islands into various themed tourist attractions and establishing six marinas across the country, including one in Haeundae Beach in Busan.

By Sohn Il-seon and Kim Hyo-jin