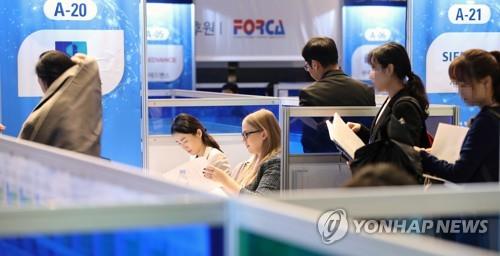 The job fair, running for two days, co-costed by the Ministry of Trade, Industry and Energy (MOTIE) and Seoul Metropolitan Government, and co-organized by KOTRA and the Financial Supervisory Service (FSS).

It will provide an opportunity to recruit talents and promote companies for foreign-invested companies, and jobs at global companies for job-seekers.

This year, the International Financial Section and R&D Section are added, to provide employment information tailored to job-seekers interested in finance and engineering research fields.

39 companies participate in the on-site interview booths, who conduct interviews with job seekers who have passed a screening process prior to the event, 56% up from the previous year.

According to the survey by KOTRA on HR officials in participating companies, the number of new jobs until next year is about 6,800, with employing 1,400 by the later half of this year.

The participating companies preferred those who completed university education (80.4%), and those majored in mechanical engineering (14%) and management (14%).

They said personality (24.2%), previous job experience (23.8%), foreign language (23.8%), and relations between job and major are important in hiring.

Minister for Trade Yoo Myung-hee said, "The number of foreign-invested companies in Korea is about 14,000, 2 percent of total corporations. But they account for 5.5 percent of employment, and provide quality jobs," adding that "I hope this job fair provides young job-seekers with an opportunity to find jobs."