MOTIE is set to enhance cooperation with Russia on shipbuilding & plant
Date
2019.06.10
Views
497 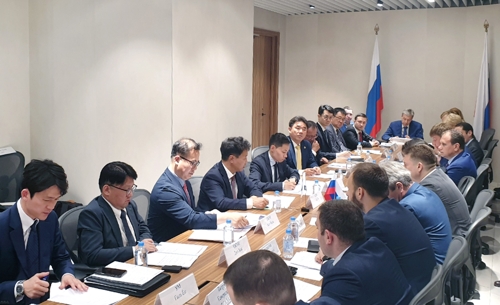 (SEOUL=Yonhap News) On June 5, the Ministry of Trade, Industry, and Energy (MOTIE) said that it held the "9th Korea-Russia Industrial Cooperation Committee" on Moscow, pledging to step up economic cooperation on shipbuilding, plant, among others.

The two sides agreed to endeavor to launch free trade agreement (FTA) negotiations related to service and investment, agreed upon the summit between Korea and Russia in June, 2018.

With regard to steel safeguard investigation launched by the Eurasian Economic Commission in August 2018, Korea requested Russia to stop the investigation without taking any measures, insisting compliance with World Trade Organization mechanism.

They welcomed opening of the Korea-Russia marine equipment research center, promising to cooperate in shipbuilding areas including technology and materials, other than ship construction.

The two sides also agreed to share information on promising projects and open forums in the plant area.

The two also agreed to support implementation of special investment agreement of Hyundai Motors, signed in December last year. Hyundai Motors is to invest KRW 305 billion in establishing R&D center, etc., while the Russian government is set to provide benefits such as exemption of corporate tax and property tax.

They also signed MOU on "Korea-Russia Industrial Technology Cooperation Desk Establishment and Operation" in shipbuilding, as well as pharmaceutical and medical equipment areas.

MOTIE explained that Russia is a large market with 1.4 billion population and rich in resources, topping the natural gas reserve, being the core country for cooperation in new Northern policy.