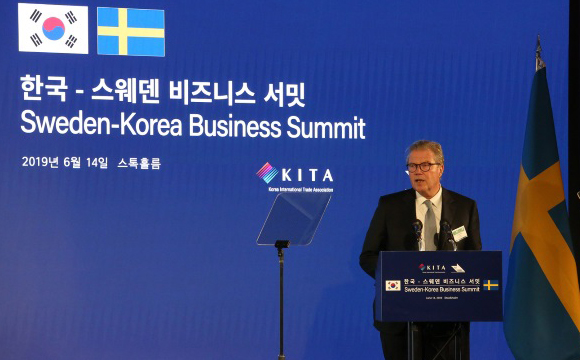 AstraZeneca PLC, a British-Swedish pharmaceutical company, will invest a total $630 million in South Korea’s biotech and healthcare sectors over five years starting next year, betting on the Korean government’s big push to nurture the bio and healthcare industries as the country’s next growth engines.

The investment plan was announced by Leif Johansson, chairman of AstraZeneca, during a Korea-Sweden business summit organized by Korea International Trade Association (KITA) in Stockholm on Friday (local time). The summit was held on the sideline of President Moon Jae-jin’s state visit to Sweden last week as part of his Northern Europe trip.

Johansson said during the summit that the biomedicine industry is a key industry for both Korea and Sweden, and the latest investment plan will motivate the two countries to promote joint innovation, enhance industry capacity, and establish an ecosystem that increase consumer accessibility on healthcare. AstraZeneca’s investment will be focused on improving research and development, creating quality jobs, nurturing R&D professionals, and improving access to new drugs for local patients.

More details about their joint investment in the Korean biomedicine will be discussed later this year.

President Moon, who also attended the Korea-Sweden business summit, said that Korea will provide active support so that the two countries’ investment and partnership continue and projects precede as planned.

AstraZeneca – a merger between Swedish pharmaceutical firm Astra and UK-based Zeneca in 1999 – is world’s 11th largest pharmaceutical company that raised $22.1 billion in sales last year. The company focuses mainly on treatments related to cardiovascular, gastrointestinal, and respiratory disorders, as well as medicines on pain treatment. The British-Swedish firm entered the Korean market in 1980 when Astra signed a license contract with Yuhan Corporation.

The business summit, which was held in commemoration of the 60th anniversary of diplomatic relations between Korea and Sweden, was attended by about 230 guests from the government and business circles from both countries, including President Moon, King Carl XVI Gustaf, Prime Minister Stefan Lofven, and officials from Hyundai Motor Co., NCSoft Corp., Volvo AB, and Ikea AB.

By Park Yong-beom and Lee Eun-joo