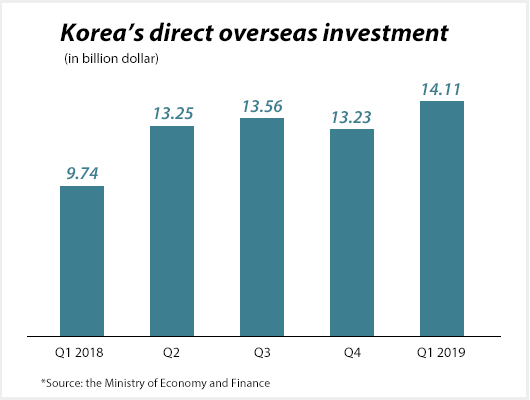 Direct overseas investment by Korean companies in the first quarter surged to hit a historic high whereas their spending at home contracted for the fourth quarter in a row, raising concerns for migration of Korean capital amid tough regulations and slow economy on home turf.

Korean companies’ investments abroad in January-March this year jumped 44.9 percent from a year earlier to $14.11 billion, the highest since data compiling from 1981, according to a report released by the Ministry of Economy and Finance on Friday. The on-year growth is the fastest since the first quarter of 2017 when outward direct investment rose 62.9 percent.

The ministry attributed the sharp hike to the base effect against slow overseas investment a year earlier. Korean firms’ offshore investment in the first quarter last year stopped at 9.7 billion won, which was even below the average of $12.0 billion over the past nine quarters.

Overseas direct investments made by manufacturers jumped 140.2 percent on year to an all-time high of $5.79 billion as many aggressively sought mergers and acquisitions abroad for global expansion and upped facilities investments to ramp up overseas production capacity. One of the major M&As of first quarter include CJ CheilJedang’s acquisition of American food distributor Schwan’s Company for $1.84 billion.

Finance and insurance firms’ outward investments gained 48.2 percent on year to $4.76 billion and real estate firms up 36.4 percent to $1.61 billion as they opted to head abroad for higher profits.

Investments into the United States and China grew notably. Direct investment in the U.S. totaled $3.65 billion, up 95.2 percent on year, amid intensifying trade protectionism. Investments in China more than doubled to $1.69 billion as existing companies ramped up local production of semiconductors and information and communication technology (ICT) products.

In contrast, domestic facilities investment shriveled 17.4 percent against a year earlier, extending the losing streak for the fourth consecutive quarter.

By Chung Seok-woo and Cho Jeehyun