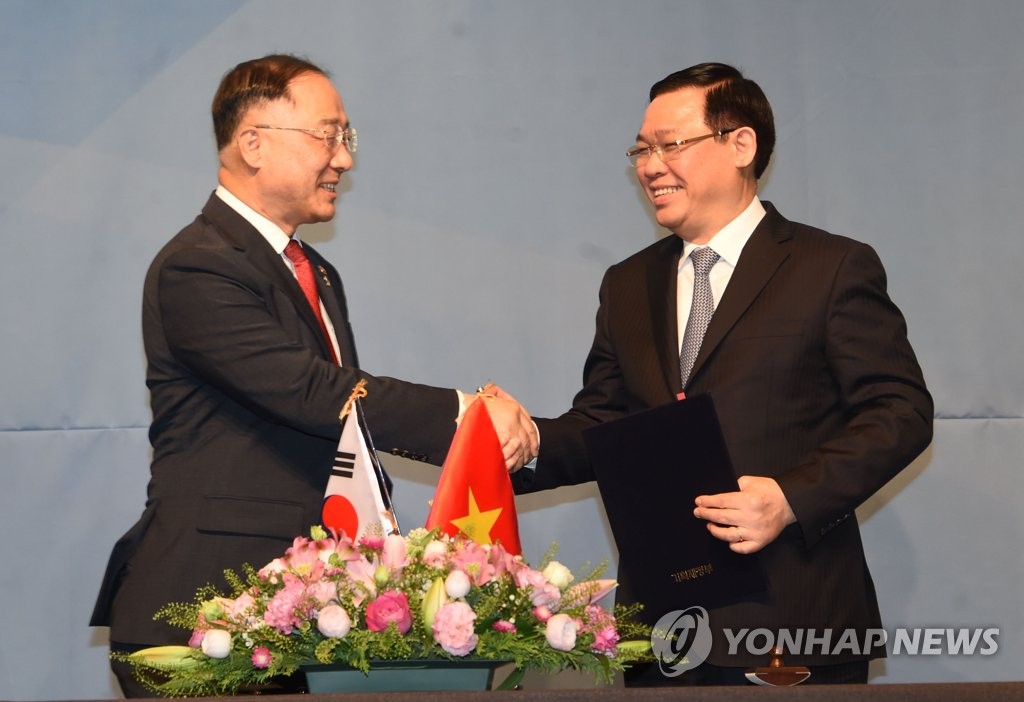 (SEOUL=Yonhap News) South Korea said Friday that it has agreed with Vietnam to cooperate to ensure that South Korean companies can participate in large-scale infrastructure projects in the emerging Southeast Asian country.

The agreement was reached between Hong Nam-ki, the minister of economy and finance, and Vietnam's Deputy Prime Minister Vuong Dinh Hue at a Seoul hotel.

Hue is in Seoul for the first talks between the deputy prime ministers of the two countries, an arrangement set up following last year's state visit to Vietnam by South Korean President Moon Jae-in.

Hong, who doubles as South Korea's deputy prime minister, said Seoul will set up a "cooperative center" in Vietnam to make sure that infrastructure projects, including an airport, will succeed in Vietnam through the participation of South Korean builders.

South Korea and Vietnam "agreed to actively cooperate to ensure South Korean companies can participate in large-scale infrastructure projects in Vietnam," the Ministry of Economy and Finance said after the talks.

The talks were meant to assess the progress of agreements reached at Moon's summit talks with Vietnamese President Tran Dai Quang in Hanoi in March last year.

The summit deals called for, among other things, boosting bilateral trade to US$100 billion by 2020.

In 2018, the bilateral trade volume came to $68.3 billion, a dramatic hike from $500 million in 1992, when the two sides established diplomatic relations.

South Korea and Vietnam agreed to expedite negotiations to revise their double taxation avoidance pact that was signed in 1994. The two sides hope to sign a revised pact on the sidelines of the special summit between South Korea and the 10-member Association of Southeast Asian Nations in November.

South Korea has sought stronger economic ties with Southeast Asian countries to reduce its heavy reliance on large markets like the United States and China and to foster new growth drivers.