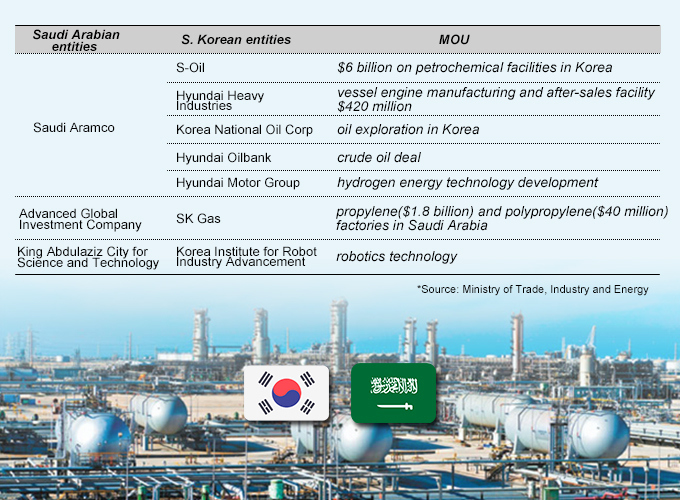 Although humbler in sheer numeric figures than his multibillion-dollar pledges during the leg of Asian tour in February, Saudi Arabia’s de facto leader Crown Prince Mohammed bin Salman (MBS) wrapped up his two-day visit to South Korea on Wednesday with generous commitments to $8.3 billion business deals.

The $8.3 billion worth agreements were signed between the Middle Eastern government and Korean state-run and private companies in presence of South Korean President Moon Jae-in and MBS at the presidential Blue House on Wednesday.

The agreements include a deal between Saudi Arabia’s national oil company Saudi Aramco and Korean oil refiner S-Oil accounting for $6 billion, a memorandum of understanding signed at the government level to collaborate on hydrogen fuel-cell technology development, as well as a number of MoU agreements between the Saudi Arabia government and Korean private companies.

Saudi Arabia under the plan of Saudi Vision 2030 aims to reduce its heavy dependence on oil and diversify its economy. Korea is one of the oil kingdom’s eight strategic partners for the project.

Under the economic pact, the two countries will work together on expanding hydrogen economy at all level, from developing hydrogen from crude oil to storing and transporting hydrogen fuel.

The economic pact, however, did not cover much-talked-about nuclear power plant projects. Saudi Arabia has launched a project to build two nuclear plants, and five companies from various countries, including a Korean firm, are competing to win the deal. The two countries kept the related talk at the basic level, saying that Saudi Arabia welcomed South Korea’s participation in the bidding for the country’s first nuclear power plant project in a joint statement.

Initially, it was expected for Saudi Arabia to release a shortlist for the project within the first half of this year, but the whole schedule is projected to be pushed back to the next year as Riyadh is having trouble narrowing differences with Washington over nuclear materials.

The crown price of Saudi Arabia also held separate meetings with Korea’s top business leaders including Samsung Group heir Jay Y. Lee and SK Group Chairman Chey Tae-won after the luncheon hosted by the Korean presidential office. MBS and Lee had a separate meeting held in Samsung’s private guest house in the evening. Samsung’s Lee reportedly agreed with the crown prince to cooperate on information and communication technology business including artificial intelligence and Internet of Things

technologies in a separate meeting. MBS has turned to the East after Western states suspected his role in the murder of Saudi journalist Jamal Khashoggi late last year. During his high-profile tour to Asia in February, he pledged $20 billion worth investment in Pakistan, $28 billion in China and open-ended goal to invest as much as $100 billion in India.

By Park Yong-beom and Cho Jeehyun