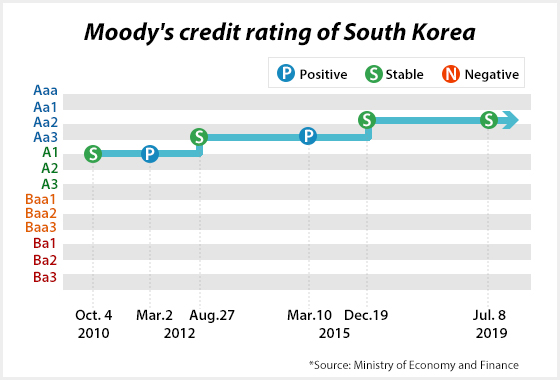 Moody’s Investor Service on Monday reaffirmed South Korea’s credit rating at Aa2 with a stable outlook in a show of confidence in the country’s strong economic and fiscal fundamentals despite the escalating near-term risks from the external front.

Korea has stayed on the third-highest rank of the agency’s rating scale since December 2015.

“Korea`s economy is highly diversified and competitive when compared with rating peers, although its reliance on international trade poses near-term drag from flagging external demand,” the agency said in its annual report.

In May, Moody’s cut Korea’s economic growth outlook for this year to 2.1 percent, citing “weakening in investment cycle and deceleration in global trade” in the economy reliant on chip shipments and demand in China.

The slowed momentum, however, has not affected the rating profile on Korea’s sovereign debt as “strong institutional framework is balanced against risks posed by persistent geopolitical tensions,” according to the agency.

Exports, the country’s primary growth engine, fell for the seventh straight month in June amid trade frictions between the United States and China. Shipments of semiconductors, which account for one-fifth of Korea’s total exports, tumbled 30.5 percent on-year in May and another 25.5 percent in June, as memory chip prices plummeted due to excess supply.

Moody’s added the “risk of military confrontation with North Korea poses unusually pronounced exposure to event risk for a sovereign in the Aa-rated category.”

The United States and North Korea agreed to resume their stalled nuclear talks after the leaders of both countries came together at the Korean border for their third summit in late June. But just three days after their historic meeting at the heavily fortified demilitarized zone, North Korea accused the U.S. of being “hell-bent on hostile acts” and “obsessed with sanctions,” shifting back to the kind of belligerent rhetoric that had escalated tensions between the two countries in recent years.

In addition to the geopolitical risk, Moody’s pointed to “long-term economic and fiscal costs brought on by a rapidly aging population” as another primary credit challenge.

Korea has the fastest aging population among developed economies. It became an “aged society” in 2017 when the percentage of people aged 65 and above surpassed 14 percent of the total population. That figure is expected to exceed 20 percent by 2025, making Korea a “super-aged society.”

The main Kospi retreated 2.20 percent to close Monday at 2,064.17 amid dampened rate cut expectations following a strong rebound in U.S. job growth figures. The Korean won fell 0.94 percent, or 11.00, against the U.S. dollar at 1,181.40. By midday, the benchmark three-year government bond was yielding 1.6 basis points higher at 1.439 percent.

By Chung Seok-hwan and Kim Hyo-jin