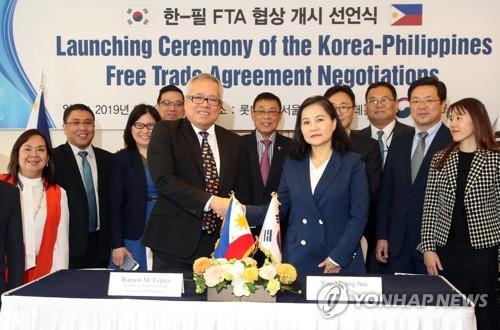 (SEOUL=Yonhap News) Korea plans to hold the second round of negotiations on the bilateral free trade agreement (FTA) with the Philippines in Manila, Philippines on July 15-17.

The two sides held the first round of negotiations in Seoul on June 4-5.

During the meetings, negotiations on various areas including product, service, investment, and general rules are expected to gather momentum.

The two countries are agreed on concluding the negotiations in the occasion of 2019 ASEAN-ROK Commemorative Summit slated for November this year.

The Philippines is Korea's fifth largest trading partner (with trading volume standing at USD 15.6 billion as of 2018) among ASEAN countries. If this FTA goes into effect, Korea is expected to more actively pursue its new Southern policy, while strengthening bilateral economic cooperation.