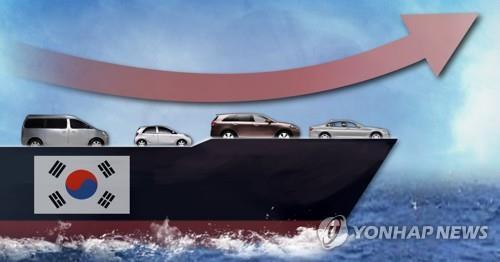 In terms of value, vehicle exports increased 7 percent on-year to US$21.69 billion, according to the data.

The strong result was helped by robust sales of lower-emission vehicles and competitive SUV models in global markets, though demand in China remained weak in the first half.

Total sales of passenger and commercial vehicles in China fell 12.4 percent in the first half from a year earlier, while those of passenger cars in the U.S edged down 1.9 percent due to weak consumer demand amid protracted trade frictions between the U.S. and China.

By region, shipments to North America moved up 21.3 percent on-year to $9.47 billion in the first half, with Asian countries accounting for $1.25 billion, up 22.1 percent.

Meanwhile, exports to the European Union totaled $4.45 billion, down 0.9 percent over the cited period. Shipments to the Middle East plunged 20.9 percent to $1.74 billion in the January-June period from a year earlier.

South Korea's auto production edged up 1.2 percent on-year to reach 2.03 million units in the first half, helped by the launches of Hyundai's flagship Palisade SUV and new SUV models from other carmakers.

In terms of domestic sales, the figure decreased 3.7 percent to 867,380 units over the cited period.