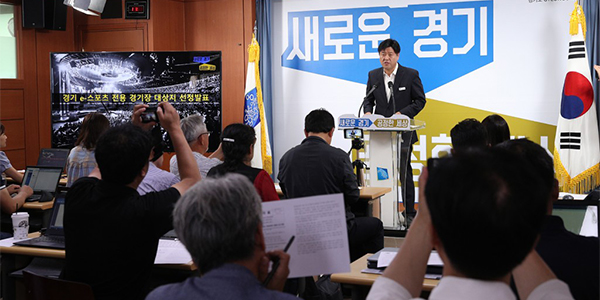 South Korea is building a stadium and park devoted to eSports in Pangyo, Gyeonggi Province, south off the capital Seoul, befitting its global reputation as the republic of eSports.

Gyeonggi Province said on Monday that it will build an eSports stadium in Seongnam, the second largest city in the province, after it was evaluated as the best location among four satellite cities that participated in a bid to create the venue.

eSports raises hopes to be the next Taekwondo-like sure medal win for Koreans in Olympics as it was held as a demonstration event for the first time in the Asian Games in Indonesia last year.

Professional gamers already earn millions of dollars in Korea, and eSports player is more popular than soccer or any other traditional sports players among the young, coming in eighth professions in an education ministry poll on elementary pupils.

Seongnam City was highly evaluated for its close proximity to Seoul, the symbol Pangyo holds, concentration of information technology (IT) and game companies in the area, the city’s will to promote the project and its outstanding preparation capability, high understanding of the project, and its detailed project plans proposed to the committee.

The building will have a 400-seat main stadium and a 50-seat sub stadium, with an area for professional gamers, a PC room, a studio, a multi-purpose complex, a gift shop, and drop-in center for game addiction prevention.

The eSports stadium will also have a facility where 1,500 audiences will be able to view online sports game. The provincial government will also build a 12-meter high and 25 meter long large media wall and terrace seats outside surrounding the stadium by 2025.

Gyeonggi Province, meanwhile, will sign a business agreement with the city by September and provide related administrative support and budget so that the city will be able to complete construction by March, 2022.

Seongnam City also plans to put out efforts to expand the game industry market, such as by participating in bids to host e-sports events, running an international e-sports league, and creating a team of professional gamers.

Once the eSports stadium is built, the city projected that about 128,000 gamers and fans from home and abroad will visit the venue every year and spend 3.45 billion won in total to purchase gifts and pay for admission fees.

By Ji Hong-goo and Lee Eun-joo