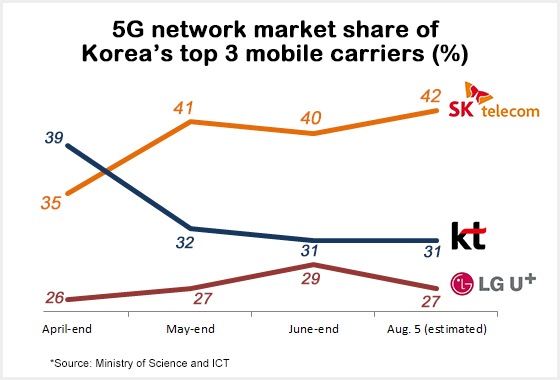 The number of 5G network subscriptions in South Korea has breached a milestone figure of 2 million in just four months since commercial service launch, proliferating at twice faster than projected by the industry and authorities.

As of Tuesday, the number of mobile users subscribed to 5G service in Korea reached 2.01 million, according to telecom industry sources.

Korea became the first country in the world to commercially launch 5G service on April 3. The 1 million milestone was reached on June 10 and the 2 million two months later.

Industry experts earlier projected the country’s 5G mobile subscriptions would reach 2 million around the end of this year.

Migration to the 5G network has been faster than the adoption rate of LTE (Long-term Evolution), the fourth-gen wireless standard. It took about a week longer for LTE subscriptions to hit the 2 million-milestone. LTE service was introduced in the country in September 2011.

The growth in 5G subscription in Korea is expected to pick up speed further as new 5G-enabled smartphones including Samsung Electronics Co.’s new flagship Galaxy 10 5G are readying to hit store shelves soon. Recently, the number of 5G subscription has been rising by 20,000 daily, which could double total 5G subscriptions to 400,000 by the end of this year, experts forecast.

Among the country’s top three mobile carriers, SK Telecom so far holds unrivaled leadership in 5G with 840,000 subscribers or an around 40 percent share. The runner up was KT with 630,000, and LG Uplus tagged closely behind with 540,000.

Industry experts anticipate SK Telecom to win 1 million 5G subscriptions this month, which would be the first in the world.

Korea is showing strong performance in the 5G network equipment market. Samsung Electronics Co. has outpaced Huawei in the 5G network equipment race, by commanding a 37 percent market share for the fourth quarter of 2018 and the first quarter of 2019 versus the Chinese rival’s 28 percent. European makers Ericsson and Nokia came third and fourth, with a 27 percent and an 8 percent share, respectively.

By Lee Sun-hee and Cho Jeehyun