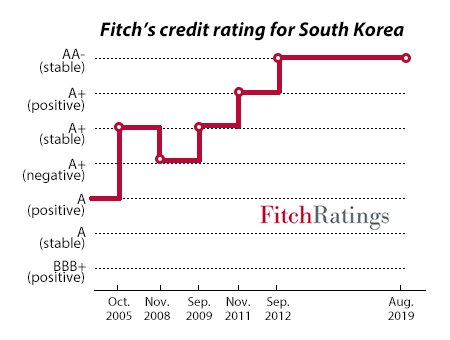 Fitch Ratings Inc. on Friday kept South Korea’s sovereign credit rating and stable outlook unchanged at AA-, fourth highest on its scale, although the country’s growth is expected to slow to 2.0 percent and uncertainties linger for next year on mounting trade woes.

Fitch forecast that growth will slow to 2.0 percent this year and 2.3 percent next year, with intensified downturn in the semiconductor sector that drives a contraction in exports and facility investment. Escalating U.S.-China trade war and rising uncertainties from trade tensions with Japan weighs on exports and investor sentiment, it added.

The agency considered Japan’s recent removal of Korea from its trusted trade partners list “another hurdle for Korea’s economic outlook,” saying the action could disrupt supply chains and weigh on business confidence and investment in Korea.

Given rising uncertainty from escalating trade tensions and subdued inflationary pressure, Fitch expected another 25 basis points cut in the policy rate by the end of the year. The Bank of Korea delivered its first rate cut by 25 basis points to 1.5 percent in more than three years on July 18.

Government debt volume is expected to reach at 37.1 percent of gross domestic product (GDP) this year, broadly in line with AA level peers, but steadily grow to around 40 percent by 2023 on a fiscal expansion following Seoul’s plan for a looser fiscal policy, Fitch added.

By Chung Seok-hwan and Lee Ha-yeon