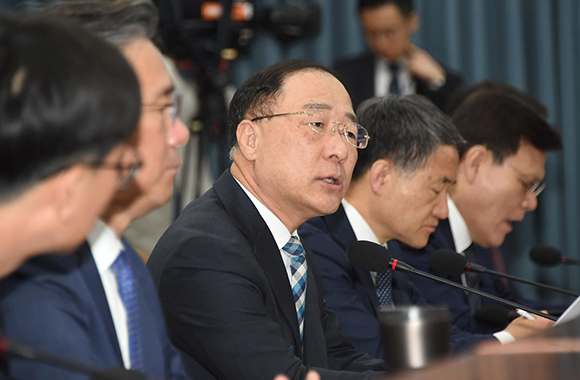 South Korea will expedite state-sponsored infrastructure projects worth 16.5 trillion won ($13.6 billion) in the latter half to prop up the sluggish economy that is headed for the smallest growth in a decade.

“We plan to pour an additional 360 billion won into research of smart construction technologies, with an aim to boost the productivity and safety of the construction sector by 50 percent by 2025,” Hong said.

Red tapes in the construction industry would be removed to reduce unnecessary costs and improve business conditions, he said. He vowed to take action against 26 regulations, including those to simplify the administrative process and rationalize the company assessment system.

The government has unveiled a slew of new projects to revitalize the country’s construction industry that has slumped under tighter regulations on the housing market and sluggish domestic demand.

Hong also stressed on aid to exports and small businesses.

Last month, Korea’s central bank revised down its economic growth outlook for this year to a 10-year low of 2.2 percent from 2.5 percent projected in April. Exports, the country’s main growth engine, tumbled for the eighth straight month in July, with shipments in the first half down 8.5 percent from a year earlier.

A new set of measures to spur exports would be out in the coming weeks, Hong said.

Meanwhile he revealed R&D plans to raise competitiveness in components, materials and equipment among small businesses as part of efforts to bolster tech self-sufficiency following Japan’s export curbs on semiconductor and display materials to Korea. He said the investments would be expanded and stretched out over a longer term to assist companies at different stages in the upscaling process.

By Sohn Il-seon and Kim Hyo-jin