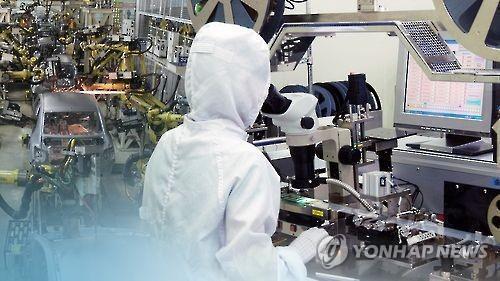 (SEOUL=Yonhap News) South Korea's industrial output advanced for the second straight month last month on the back of a rise in the service sector, government data showed Monday.

The data compiled by Statistics Korea showed the country's overall industrial output rose 0.5 percent in August from a month earlier.

Production in the mining, manufacturing, gas and electricity industries fell 1.4 percent last month from a month earlier due mainly to decreased output in cars.

Meanwhile, the output of the service sector increased 1.2 percent on-month due in part to increased sales of cars.

Retail sales rose 3.9 percent in August from a month earlier -- the highest level since January 2011, when they advanced 5 percent.

Kim Bo-kyoung, director of Statistics Korea's industry statistics division, said the hike in retail sales is attributable to increased purchases of passenger vehicles and rising demand for gift sets ahead of the Chuseok holiday, the Korean autumn harvest celebration.

From a year earlier, overall industrial output grew 0.2 percent, according to the data.