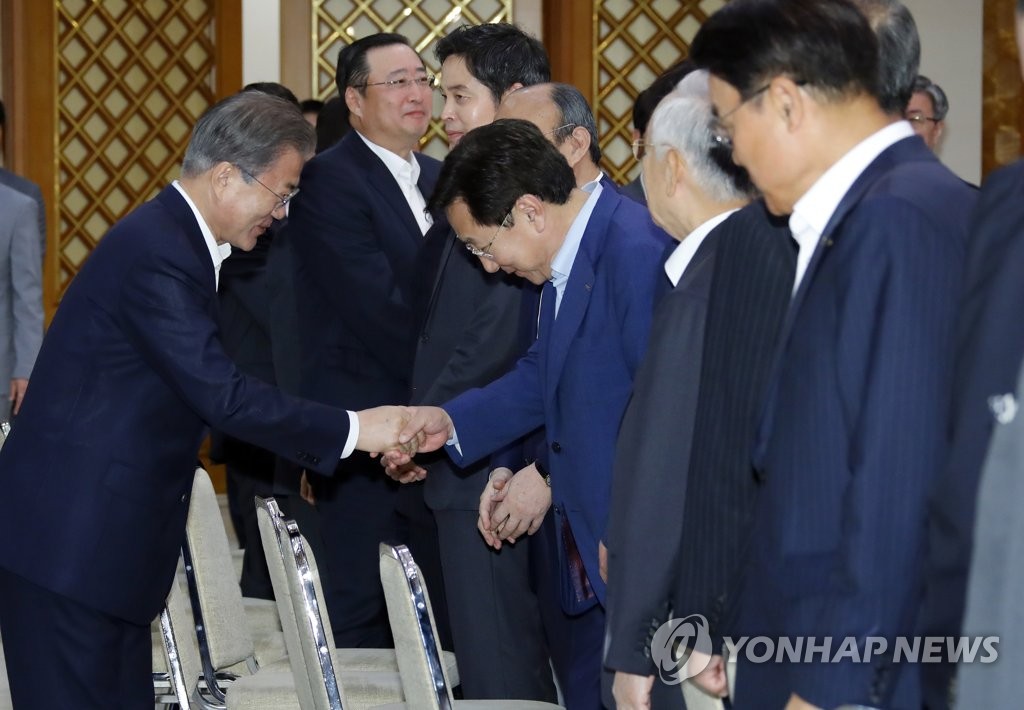 President Moon Jae-in met with the heads of four major business lobbies on Friday to discuss economic challenges faced by the country, including a trade feud with Japan, a shorter workweek and inter-Korean cooperation.

At the closed-door luncheon at Cheong Wa Dae, Moon and the business leaders also discussed the issue of a shuttered inter-Korean industrial park in the North Korean border town of Kaesong, his office said.

Moon asked the leaders whether, should Kaesong Industrial Complex be reopened, South Korean companies operating there would be sustainable regardless of government changes in the South.

In response, Kim Ki-mun, chairman of the Korea Federation of SMEs said, "Such sustainability would be guaranteed if multinational companies advance into the complex, which would help build trust there."

South Korea shut down the Kaesong complex in February 2016 in response to North Korea's nuclear and long-range missile tests. The reopening of the factory park hinges on progress on North Korea's denuclearization.

Earlier in the day the SMEs federation told reporters that the president said he will make efforts to turn Kaesong into a multinational industrial zone, if it is reopened. But the entity later said the remark was made by its chairman, not President Moon.

Such a discussion draws attention, as it appear to be in line with his vision of seeking inter-Korean economic cooperation through the support of the international community.

During his speech at the U.N. General Assembly last month, Moon proposed turning the Demilitarized Zone (DMZ), which bisects the two Koreas, into an international peace zone with the help of the United Nations.

Friday's meeting, which was arranged to listen to the business leaders' the economic situation and explore ways to revitalize the economy, also brought together Park Yong-maan, chairman of the Korea Chamber of Commerce and Industry (KCCI); Sohn Kyung-shik, head of the Korea Employers Federation; and Kim Young-ju, chief of the Korea International Trade Association, according to the officials.

During the meeting, Moon and the business leaders also discussed countermeasures regarding Japan's curbs on exports to South Korea, according to the officials.

In early July, Japan adopted strict regulations on South Korea-bound exports of key industrial items vital for the production of semiconductors and display panels. Tokyo then removed Seoul from its list of trusted trade partners in early August.

Citing the meeting of businesspersons of South Korea and Japan held last month, Sohn asked for the government to play a role in resolving the feud with Tokyo, while saying that companies of the two countries would continue to be proactive.

As for the plan to expand the 52-hour workweek system to companies with 50 to 299 employees next year, Moon said the government is preparing measures to make up for the shortcomings of the system, taking into account small and medium-sized enterprises' troubles, and will unveil them soon.

For smaller firms, the shorter workweek system serves as a financial burden amid an economic downturn.

The meeting came amid growing concerns that the South Korean economy is losing steam on faltering exports and sluggish domestic demand.

The government has dismissed concerns about deflation, but a set of economic data points to slackening economic momentum.

South Korea's exports, one of the main economic pillars, sank 11.7 percent on-year in September, hit by weak chip prices and a yearlong trade row between the United States and China.

The South has been grappling with Japan's restrictions on exports of key high-tech materials to Seoul since July.