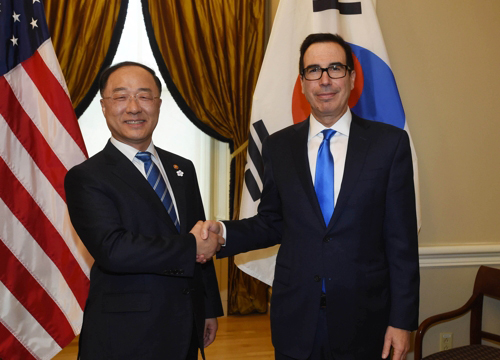 Seoul and Washington will partner to back infrastructure financing in developing economies in South American and ASEAN markets in latest show of unwavering ties between the traditional allies.

The Korean finance ministry said Friday that Hong Nam-ki, finance minister and deputy prime minister, and U.S. Secretary of the Treasury Steven Mnuchin signed a memorandum of understanding to strengthen infrastructure finance and market building cooperation in Washington D.C. on Thursday (local time). It is the first time for the finance ministries of the two countries to sign such agreement.

A finance ministry official said the memorandum was signed upon receiving a request from the U.S. in July. The U.S. also has similar pact with Singapore and four Latin American countries.

Hong in a Facebook post said the signing of the agreement provides a chance for further advancement in the bilateral economic relations and also reaffirms the strong relationship between Korea and the U.S. He added the memorandum complements Korea’s efforts to expand cooperation with other Asian economies and also the U.S.’s goal to promote free and competitive economies in the Indo-Pacific region.

The U.S. Treasury Department also released the news on the memorandum on the same day. “It is a great step forward for the United States and the Republic of Korea that will help catalyze private sector capital for investments in infrastructure and spur impactful, scaled growth opportunities for both countries,” Mnuchin was cited in the announcement.

By Lee Ji-yong and Cho Jeehyun