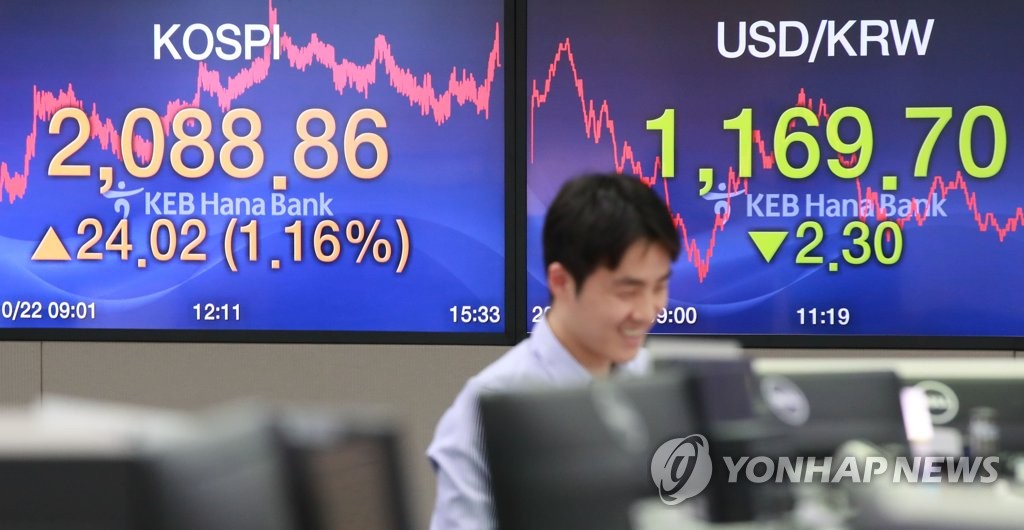 Since the beginning of this month, foreign investors sold a net 880.3 billion won (US$752 million) worth of local stocks, becoming net sellers in 10 out of 13 trading sessions as of Monday.

They also sold a net 345.4 billion won in three consecutive sessions following the latest base rate reduction by the BOK monetary policy board last Wednesday.

Still, foreign investment in the country's stock and bond markets is on the plus side, according to Chae Hee-kwon, head of the BOK's Capital Flows Analysis Team.

"It is true that (foreign) stock funds have been on a decline since August. The amount is not great, but the stock fund is on a downward trend because of global uncertainties, such as slowing the growth of the global economy and that of China," Chae said.

"Bond investment, on the other hand, is steadily flowing in. It showed a slight net increase last month and is about on par this month," he added.

A net increase so far may come as a surprise to many who feared an outflow of foreign investment following the second and latest base rate reduction by the BOK monetary policy board last week to 1.25 percent, matching the all-time low seen only once in 2016.

BOK Gov. Lee Ju-yeol too has noted pushing the policy rate down too low, or to what he has called a practical lower boundary, may trigger capital flight from countries that do not print key currencies, such as South Korea.

Last week's rate reduction also widened the gap between the country's base interest rate and that of the United States, also a main cause of capital flight from emerging economies, such as South Korea. The U.S.' base rate currently sits in a range of 1.75 percent and 2 percent.

"With regard to an outflow of foreign capital, I believe maintaining financial stability is more important than anything else instead of only considering the rate gap or the foreign exchange rate," the BOK chief told reporters after the latest rate-setting meeting of the monetary policy board held last Wednesday.

Signs of foreign investors' continued faith in the local economy can also be seen in the stock market despite their recent net selling, a local analyst noted.

"The fact that the amount of foreign investors' purchase of futures has been growing over the past five consecutive sessions is a positive sign. A steady buying by foreigners can expand the basis, which in turn may lead to additional purchases," said Song Seung-yeon, an analyst at Korea Investment & Securities.

Such faith comes despite a steady decline in South Korea's exports that will inevitably lead to a slower growth of the country's export-dependent economy.

The country's exports have dropped for 10 consecutive months since December and are widely expected to fall again in October with outbound shipments in the first 20 days of the month plunging 19.5 percent from the same period last year.

Its economic growth is also projected to slow significantly from the 2.7 percent on-year expansion in 2018.

The BOK has already twice revised down its growth outlook for Asia's fourth-largest economy from 2.6 percent at the start of the year to 2.5 percent in April and 2.2 percent July. The local economy grew 2.7 percent in 2018.

"At least to foreign investors, our country's sovereign ratings remain high. It also continues to post a current account surplus though its surplus may have narrowed," he said.

"Capital flows are based on relative value, and to (foreigners), our country still is an attractive market, considering its good sovereign rating, growth rate and financial stability," he said.

South Korea's current account has been in the black since April 2012, except for April when the country posted a $660 million deficit due to what the BOK has called a one-off, seasonal increase in dividend payments to $6.78 billion, the second highest in the country's history.

In the first eight months of the year, the country posted a current account surplus of $33.99 billion, down from a $46 billion surplus over the same period last year, the BOK said earlier.

The slight but steady inflow of foreign investment apparently suggests the country may still have space for an additional rate cut, analysts said.

"As the BOK governor himself has said, there still is room for a monetary policy, and we maintain our view that the BOK will additionally cut the base rate by 25 basis points and that the rate cut will likely take place in the first quarter of next year," IBK Investment & Securities analyst Kim Ji-na said.

"The room for an additional rate cut may be smaller than that of the United States, but the BOK appears firmly determined to take measures within such boundaries to counter external uncertainties if necessary," Kim added.

Baek Yoon-min, an analyst at Kyobo Securities, agreed the South Korean central bank will likely test the limits of whatever room it may have left.

"Risks from external factors, such as the U.S.-China trade dispute and Brexit, appear to show signs of easing, but uncertainties will continue to remain high until such risks are completely removed. Also, it may take even longer before any easing of such risks lead to actual improvements in economic fundamentals," Baek said.