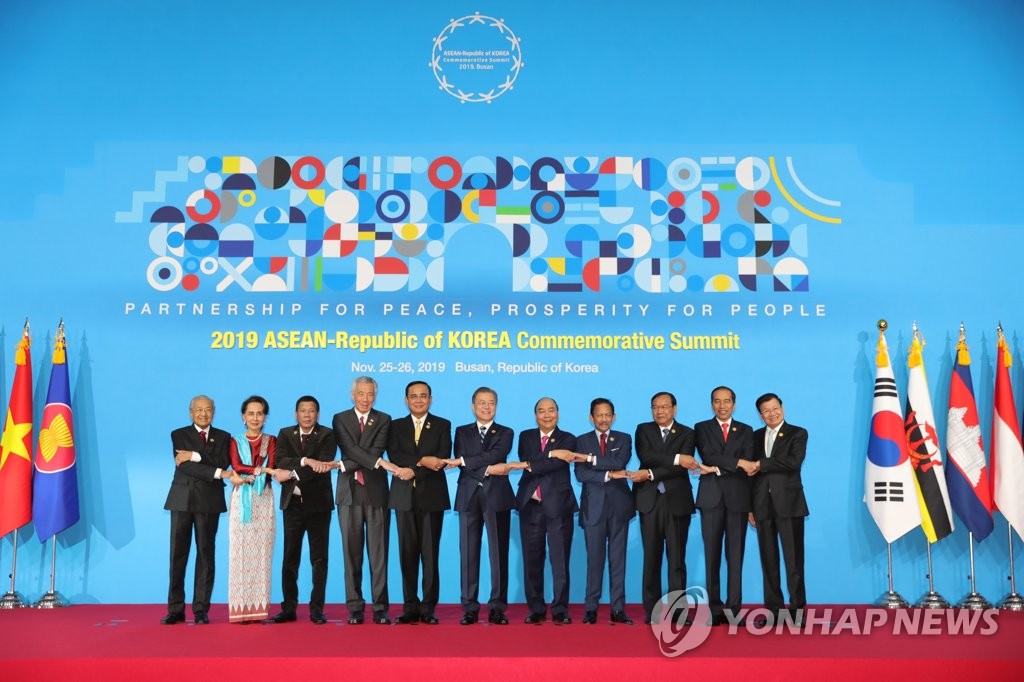 BUSAN, Nov. 26 (Yonhap) -- The leaders of South Korea and the Association of Southeast Asian Nations (ASEAN) agreed during their special summit here Tuesday to upgrade their bilateral strategic partnerships on regional and global issues for a joint response to the opportunities and challenges ahead.

President Moon Jae-in and the leaders of 10 Southeast Asian countries adopted a "joint vision statement for peace, prosperity and partnership" following the first session of the ASEAN-Republic of Korea Commemorative Summit in Busan, 450 kilometers southeast of Seoul. Session I took the theme of "Republic of Korea-ASEAN 30 & 30." The Republic of Korea is South Korea's official name.

The Busan summit is designed to celebrate the 30th anniversary of bilateral dialogue relations and seek ways to establish closer ties in the coming three decades.

The statement will serve as a framework of South Korea's future ties with ASEAN, especially with the Moon administration gearing up for its "New Southern Policy 2.0."

South Korea and ASEAN agreed to build "a People-centered Community of Peace and Prosperity."

"(The two sides will) promote and facilitate dialogue and cooperation, including through ASEAN-led mechanisms, to support complete denuclearization and the establishment of permanent peace on the Korean Peninsula in a peaceful manner," the statement read.

They took note of ASEAN's readiness to continue to play a constructive role in contributing to peace and stability on the Korean Peninsula.

The two sides will enhance cooperation in security areas to address traditional and nontraditional security challenges, such as transnational crime, terrorism and violent extremism, and further strengthen cybersecurity cooperation in a bid to support the development of the digital economy in the region, it added.

South Korea and ASEAN also agreed to promote economic cooperation for shared prosperity, especially in terms of trade and investment, connectivity, micro-, small and medium-sized enterprises (MSMEs), as well as startups partnerships and innovation, in the era of the fourth industrial revolution.

In addition, they set a goal of bolstering cooperation on sustainability and environmental issues.

Speaking at the outset of the session, Moon advocated "cooperation and solidarity" between the two sides.

"We are confronted with new challenges such as protectionism, transnational crimes and the fourth industrial revolution," he said. "Only our cooperation and solidarity can overcome the challenges."

In the ensuing Session II, they discussed ways for "promoting connectivity for sustainable prosperity." South Korea is in talks with ASEAN to boost air transport connectivity, including a move towards a "more liberal and mutually beneficial Air Services Agreement" in efforts to promote people-to-people exchanges.

As co-chairs of this week's summit, Moon and Thailand's Prime Minister Prayut Chan-o-cha issued a separate joint statement summarizing the results of discussions.

"We welcomed the significant progress of ASEAN-ROK relations during this important year which commemorates the 30th Anniversary of ASEAN-ROK Dialogue Relations," they said. "We also welcomed the ROK's commitment under its New Southern Policy to further strengthen relations with ASEAN in line with the three pillars of the ASEAN Community and appreciated the ROK's continued contribution to the region's development."

In the document, Moon reaffirmed his firm commitment to three principles in the course of resolving Korean Peninsula issues: zero tolerance for war, a mutual security guarantee and co-prosperity. He outlined his vision once again to transform the Demilitarized Zone (DMZ), which divides the peninsula, into an international peace zone.

He has already traveled to all 10 ASEAN member states in a show of his commitment to the regional initiative.

And he is to host an official welcoming dinner for the inaugural Mekong-Republic of Korea Summit to be held on Wednesday. It will involve the leaders of the "Mekong five" nations -- Cambodia, Laos, Myanmar, Thailand and Vietnam.