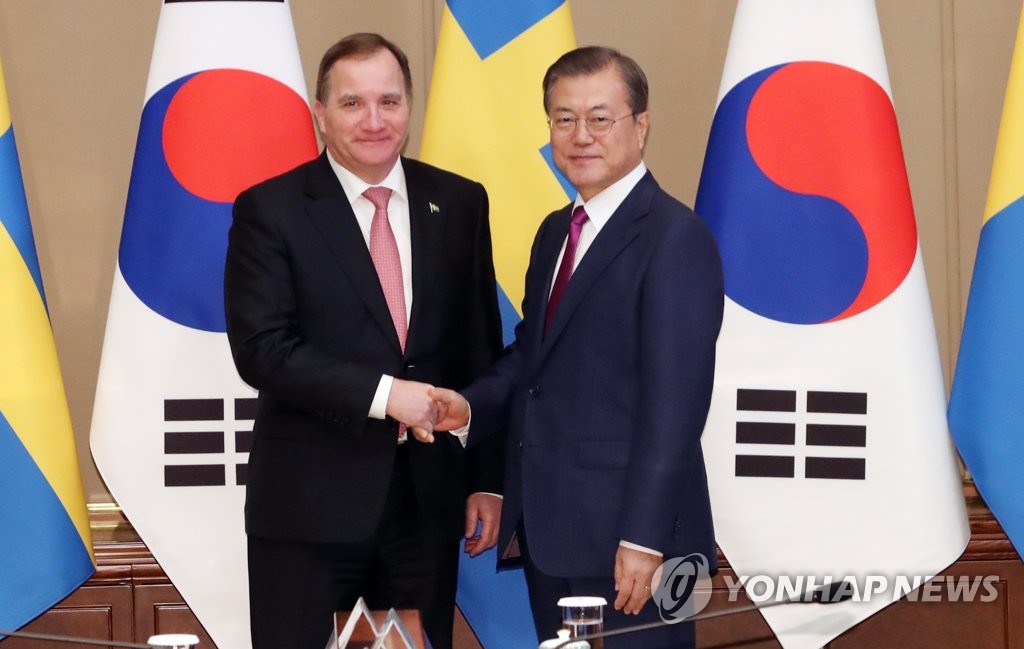 SEOUL, Dec. 18 (Yonhap) -- South Korea and Sweden reached a summit deal in Seoul on Wednesday to reinforce partnerships on promoting peace on the Korean Peninsula and responding to the fourth industrial revolution.

In talks with Prime Minister Stefan Lofven at Cheong Wa Dae, President Moon Jae-in took note of the Scandinavian country's "active contribution" to the journey toward lasting peace on the peninsula, according to Moon's office.

He asked for Sweden's continued role in and backing for the Korea peace process. Lofven agreed to keep making efforts to help facilitate related dialogue on the basis of close cooperation with the South Korean government.

Sweden has a special government envoy for Korean affairs, having hosted some working-level talks between Pyongyang and Washington. It serves as "protecting power" for U.S. citizens in North Korea.

Moon and Lofven also agreed to further develop ties on the ICT, bio-health and future vehicle sectors on top of the already close cooperation in trade, investment, the defense industry, science and technology, as well as climate change and nonproliferation.

Following their summit, the two nations signed memorandums of understanding on boosting partnerships on health care and welfare and on gender equality.

Earlier in the day, they attended a South Korea-Sweden business summit held at a Seoul hotel, in which Moon sought support for his peace economy vision.

Sweden has proved that peace amounts to economic opportunities and vice versa, he said in a speech.

"Peace on the Korean Peninsula will provide companies in both countries with far more opportunities," he stressed. "If roads and railways are linked between South and North Korea, a land way will be opened to Scandinavia via the Eurasian Continent."

A maritime Arctic route will be created, with the Korean Peninsula serving as a bridge, to enable environment-friendly ships to navigate the Pacific Ocean and the Arctic Ocean, according to the president.

Moon's statement on his hope for the re-linking inter-Korean railways and roads was not new, but it came as China and Russia have reportedly drafted a fresh U.N. Security Council resolution designed to give Pyongyang some sanctions relief to help pave the way for the resumption of related projects.

Moon expressed hope that businesspeople of South Korea and Sweden will continue to support a push to promote peace on the peninsula and in Northeast Asia and developing the free trade system.

"First, we have to expand cooperation in the future industry field and create the circumstances for innovation," he said. "Second, we should cooperate more deeply on sustainable development."

And once peace is established in Korea, "Space for new challenges will be made," he added.

Lofven arrived here Wednesday morning for his first visit to South Korea since his inauguration in 2014, accompanied by a business delegation of more than 80 representatives from 62 global firms.

Moon and Lofven held their previous summit talks in Stockholm during Moon's trip there in June. This year, South Korea and the Nordic country commemorate the 60th anniversary of the establishment of diplomatic ties.