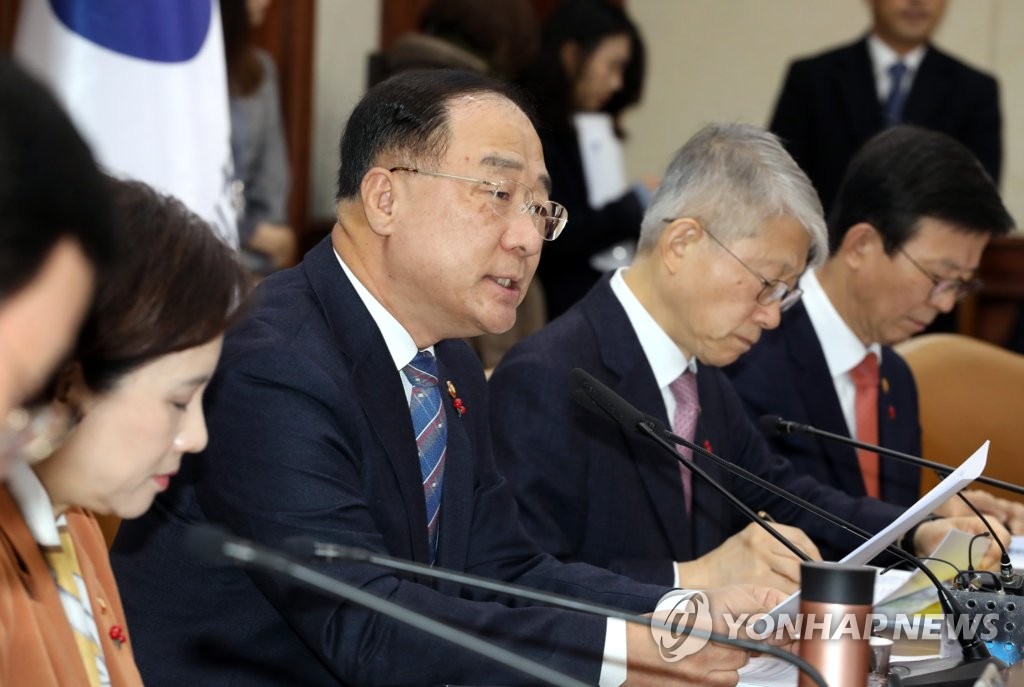 The economy is expected to grow 2.4 percent next year, following this year's estimated 2 percent expansion, on the back of an anticipated recovery in the memory chip sector and a series of policy measures, according to the ministry.

Previously, the ministry had expected Korea's economy to grow between 2.4 percent and 2.5 percent for this year, although many economists saw the previous forecast as optimistic.

Hit by a lengthy U.S.-China trade war and a cyclical slump in the memory chip sector, Korea's economy is poised to report its weakest annual growth in a decade this year.

"Top priority will be given to invigorating investments to help boost economic growth and strengthen growth potential," the finance ministry said in a statement, adding that the government will seek "bold deregulation" next year to spur corporate investment.

As part of efforts to help their financing, the government will provide financial support worth more than 10 trillion won, including 4.5 trillion won worth of low-rate loans, for companies' facility investment.

To reinvigorate the construction sector, the government will spend 23.2 trillion won next year to improve roads, railroads and social infrastructure and to build public libraries and community sports and cultural centers, according to the ministry.

The ministry said it will allocate about 70 percent of the 2020 budget in the first half of next year to prop up the slowing economy.

Earlier this month, the National Assembly approved next year's state budget of 512.3 trillion won (US$444.5 billion), up 9.1 percent from this year's.

The finance ministry said job-creating sectors and firms will receive an array of tax and other benefits, while the government will draw up more measures to help facilitate local firms' hiring of more women.

In order to bolster private consumption, the consumption tax will be lowered by 70 percent for people who scrap their old cars and buy new ones.

The government will extend a temporary tax cut on purchases of all-electric and hydrogen fuel-cell electric cars to 2022.

Riding the wave of the popularity of K-pop and TV dramas, South Korea aims to attract 20 million foreign tourists next year, the ministry said.

The government will also seek to boost innovative growth, which it claims will help the nation's economy secure its potential growth and sustainable expansion.

To finance their innovative steps, the government will offer a variety of tax incentives to KOSDAQ-listed firms and state pension funds will expand their exposure to them, according to the ministry.

The ministry said the government will also root out unfair business practices among suppliers to promote a "fair" economy.

The finance ministry said it will also unveil a set of measures or strengthen existing ones to boost the country's low birthrate, which is deemed one of the key challenges to the Korean economy.

Under the government's expansionary fiscal policy, the fiscal deficit is estimated at 3.5 percent of the country's gross domestic product (GDP) next year, compared with 1.9 percent for 2019.

The national debt-GDP ratio will rise to 39.8 percent next year from 37.1 percent this year, according to the ministry.