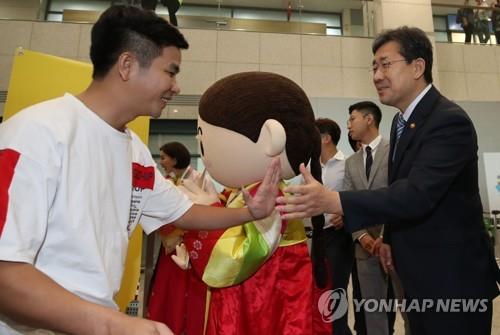 SEOUL, Dec. 24 (Yonhap) -- The number of foreign visitor arrivals in South Korea is expected to reach an all-time high of 17.5 million this year, the Ministry of Culture, Sports and Tourism and the Korea Tourism Organization (KTO) said Tuesday.

The forecast, if realized, will exceed the previous annual record of 17.24 million set in 2016.

The figure of 17.5 million visitors means one foreigner arriving here every 1.8 seconds. It also means 118 planes carrying 407 foreigners landing in South Korea every day for one year.

The ministry and the KTO estimated that the nation will be able to attain annual tourism revenue of 25.1 trillion won (US$21.58 billion), with the tourism sector expected to generate production worth 46 trillion won and 460,000 jobs.

They explained the record number of foreign visitor arrivals is particularly meaningful as China's ban on group tours to South Korea has persisted and the number of tourists from Japan has fallen sharply amid bilateral diplomatic and trade conflicts.

In the first nine months of this year, the number of foreign visitors to South Korea jumped 16.1 percent on-year, which was far higher than the global average of 4-percent growth. The achievement has pushed up the nation's ranking in the World Economic Forum's tourism competitiveness assessment from 19th in 2017 to 16th this year.

The Seoul government has simplified visa issuance regulations for Chinese college students and middle-income earners, for instance, in order to increase inbound travel from individual Chinese, the culture ministry noted.

Thanks to such efforts, the number of Chinese tourists to South Korea surged 26.1 percent on-year to reach 5.51 million in the first 11 months of this year.

Visitors from Southeast Asia and the Middle East jumped 10 percent from a year ago to 2.94 million in the January-November period.

The number of visitors from the United States is expected to top 1 million by the year's end.

On Thursday, Culture Minister Park Yang-woo plans to personally welcome the record 17,250,000th foreign visitor to South Korea this year in a ceremony at Incheon International Airport, west of Seoul.