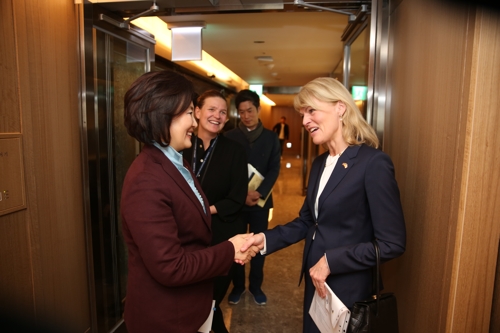 Minister of SMEs and Startups (MSS), Park Young-sun, had round table talks on Dec. 18 with a couple of representatives from Sweden- Foreign trade minister, Anna Hallberg, Marcus Wallenberg of Wallenberg Group and Cecilia Qvist of Sportify.

The meeting was part of interim review process to be sure how much both parties have worked ahead with since last June when president Moon Jae-in of S.Korea made a state visit to Sweden. At that moment, S.Korea’s Startup ministry and its Swedish counterpart signed a memorandum of understanding for partnership activities to help startups in both countries. The MSS leader also shared know-hows for a win-win partnership between SMEs and large corporations at the dialogue this time.

Unveiling the upcoming plan to open ‘Korea Startup Center (KSC)’ in the first half of next year, MSS said “We’d like to help small businesses in Korea and Sweden tap deeper into local startup ecosystems and form business networks, which would ultimately develop into a synergetic platform for growth.” The KSC is set up to settle inside the startup accelerator ‘Epicenter Stockholm’, a local business incubating community, in Sweden.

In response, Sweden’s trade minister welcomed the message for cooperation, saying “I’m so happy for the moves we’ve made towards the full implementation of the partnership. I think whether we can succeed is all up to startups, the key players.” “I firmly believe that we still have a lot to talk with for deeper ROK-Sweden connection as Sweden has recently set up a series of investment and trade policies which largely focus on how to back up startups & SMEs.”, she added.

The venue was attended by dozens of business leaders and representatives including Sportify and Wallenberg from Sweden, and SK telecom from Korea in commemoration of the dialogue formed to make sure friendship between two countries.