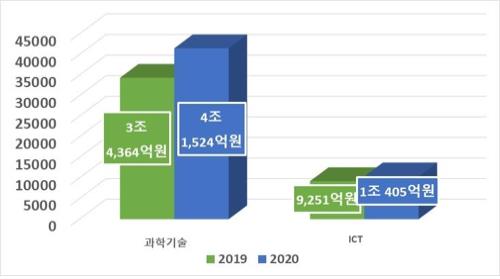 The annual research and development (R&D) spending plan covers 4.15 trillion won earmarked for science and technology and 1.04 trillion won set aside to build up ICT capabilities, according to the Ministry of Science and ICT.

Of the total, slightly more than 1.53 trillion won will be used on basic scientific research. That amount is up 319.8 billion won, or 26.4 percent, from 2019, with original tech development programs to get 1.68 trillion won. ICT R&D and commercialization support will get 812.1 billion won and 230.9 billion won, respectively, with personnel training and establishment of an R&D foundation getting 729.6 billion won.

Of the R&D projects to receive funding, the country will spend 1.68 trillion won on biotech, medicine-related technology, nano materials and space exploration. Space exploration fields to get support include development of indigenous space vehicles, creating an industrial eco-system for space exploration and joint South Korea-U.S. efforts to build a lunar probe.

The country will continue to invest in nuclear safety and knowhow to more securely store spent fuel rods.

On ICT-related R&D, Seoul plans to focus on expanding 5G mobile communication base and develop technology in the field of next generation smartphones, network equipment, augmented reality and virtual reality devices, connected robots and data security. It said efforts to strengthen the 5G equipment sector will get 10 billion won in the new year, with assistance to be given to projects that can help the country become self-sufficient in key components and manufacturing equipment.

Asia's fourth-largest economy, moreover, plans to maintain its lead in the telecommunication field by conducting preliminary feasibility studies on 6G communication technology. This includes investing in joint research with Finland, which is interested in 6G telecom tech.

South Korea announced earlier that it aims to allocate 976 billion won from 2021 through 2028 on 6G tech fields.

Besides industries, Seoul said it will encourage young scientists by providing monetary support to 765 projects in 2020, up from 591 last year, with each researcher eligible for upwards of 150 million won in support, compared with 100 million won in the past. The country will inject 29.5 billion won to train engineers and technicians and another 14.1 billion won to support female scientists, the ministry said.