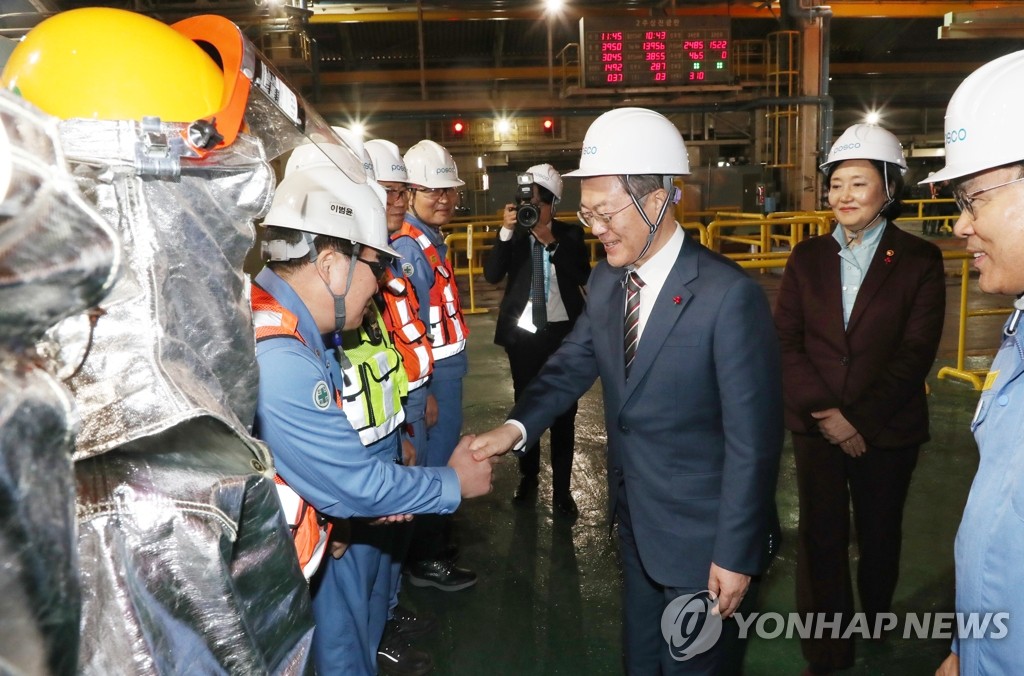 The firm has agreed to inject 100 billion won (US$86 million) by 2022 to construct a facility to collect and recycle used electric batteries at the Blue Valley National Industrial Complex in the city, 375 kilometers southeast of Seoul. As a result, more than 300 jobs would be created.

The deal was formally signed by the authorities of both the city and the province, with Moon in attendance.

The envisioned plant is expected to serve as an advance base for South Korea's secondary battery industry, with the ability to collect and process used batteries from as many as 1,000 electric vehicles a year, according to Cheong Wa Dae.

Moon took note of the potential of Pohang, where POSCO, one of the world's largest steelmakers by output, is based.

"I am convinced that it will pull off a success in the battery industry and contribute greatly to enhancing the Republic of Korea's competitiveness in the fourth industrial revolution era," he said in a speech.

In particular, the production and processing of batteries for electric cars has become more important in light of the South Korean government's plan to supply 33 percent of new vehicles with environment-friendly ones by 2030, Moon added.

Last year, the government picked the province as a special regulation-free zone for next-generation battery recycling.

The president also pledged to redouble efforts to expand the designation of such regulation-free zones nationwide in a bid to help revitalize the local economy.

It was his third visit to the city since taking office in May 2017.

He also met with some victims of an earthquake that hit the city in November 2017 who attended the ceremony. He reaffirmed the government's resolve to do its best for substantive compensation on the basis of special legislation passed by the National Assembly late last year.

Moon then toured a POSCO smart factory in Pohang, chosen by the World Economic Forum (WEF) last year as a "lighthouse factory" that has achieved innovation using the core technologies of the fourth industrial revolution.

The president said the plant highlights the global recognition for POSCO's drive to innovate in manufacturing and asked it to continue its efforts for win-win growth with small and medium-sized enterprise.