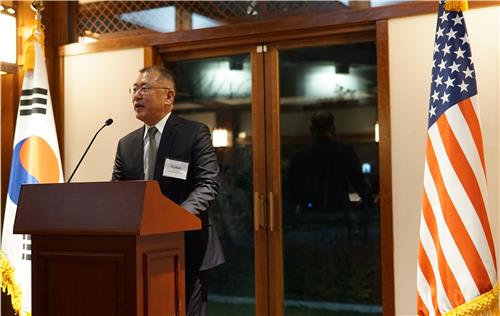 Some 140 U.S. officials, including 30 state governors, attended the summit, and it is the first time for the Korean Embassy to host the three-day event that lasts through Sunday, it said.

Hyundai aims to establish a production facility capable of rolling out 50,000 hydrogen-powered vehicles a year by 2030. It also targets selling 200,000 hydrogen fuel cell systems a year in global markets by the same year.

In 2020, Hyundai is targeting selling 10,100 Nexo vehicles, mainly to public organizations and companies, more than doubling from the 4,194 units it sold last year.

In 2019, South Korea claimed a 52 percent share of the global hydrogen fuel cell electric market, followed by the United States with a share of 29 percent, Japan with 9.7 percent and Europe with 6.5 percent.

In its broad road map for strengthening its presence in future mobility markets, Hyundai Motor Group said last month that it will invest more than 100 trillion won (US$87 billion) in the next five years.

The group that also includes Kia Motors Corp. plans to launch 44 electrified vehicles, including 11 all-electric models, by 2025 to "take the lead" in electrified car markets based on the development of its own platforms and core electrified car components.