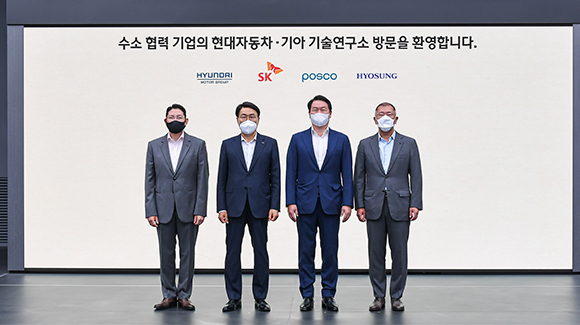 The four leaders earlier shared their vision for hydrogen economy and corporate role to push ahead with the establishment of a hydrogen committee in Korea.

During the latest meeting, they have agreed to invite more hydrogen related companies and investors to the council co-headed by representatives of Hyundai Motor Group, SK and Posco.

New members will be invited onboard by July, and the council will likely be formally launched at the first general meeting of CEOs in September.

Through the new hydrogen council, the four groups are planning to hold regular meetings and forums to boost corporate investment in hydrogen and contribute to the establishment of hydrogen society and carbon neutrality.

Each group will do their part to expand hydrogen business.

Chey Tae-won also emphasized the corporate role in nurturing the domestic hydrogen industry and vowed efforts to make a leap towards a goal of achieving global leadership.

Hyundai Motor, SK, Posco and Hyosung have been front runners in hydrogen campaign.

Posco Group envisioning a hydrogen powerhouse announced a plan to expand its green hydrogen capacity to 5 million tons by 2050 to generate revenue of 30 trillion won ($26.9 billion).

Hyosung has partnered with global gas and engineering company Linde to build a liquid hydrogen plant with an annual output of 130,000 tons in Ulsan and large-scale liquid hydrogen charging stations at 30 locations across the country.