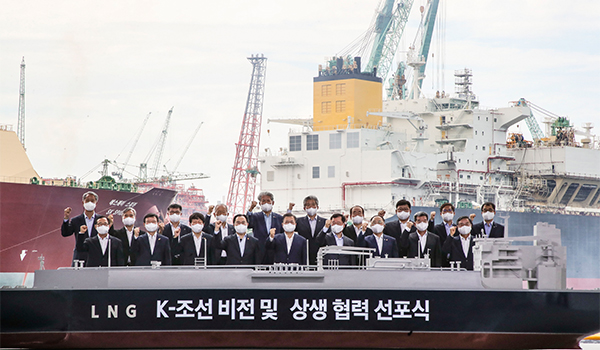 “We will strengthen the shipbuilding industry that cannot be contested by no other countries,” declared President Moon Jae-in Thursday as he flew to Samsung Heavy Industries’ shipyard in Geoje, South Gyeongsang Province, to announce a reinvigoration scheme on Korean shipbuilding industry.

The government has set out key targets to command 75 percent in global eco-friendly vessels and 50 percent in self-driving ship sector by 2030 to cement its position as the No.1 shipbuilder by dominating the future-promising shipbuilding market.

“Korean shipbuilders won 63 percent of global orders for high value-added ships and 66 percent of green vessels until July thanks to the joint efforts by companies and employees to achieve innovation in technology, production and management,” said accompanying Korean Minister of Trade, Industry Energy Moon Seung-wook. He stressed that the country needs to secure manpower, strengthen technology for eco-friendly and autonomous ships and establish international standards for related technology.

The global market for environmentally-friendly shipping including low-carbon ships fueled by LNG or LPG and zero-carbon ships by ammonia or hydrogen has been growing rapidly since 2018 after the International Maritime Organization (IMO) called for an at least 50 percent reduction in greenhouse gas emissions by 2025 compared to 2008.

The global shipbuilding industry has also been on a rapid recovery from the impact of the Covid-19 pandemic. According to British marine industry tracker Clarkson Research Services, the global ship orders reached 30.21 million compensated gross tonnage (CGT) as of the end of July, compared to 30.09 million CGT in 2019 and 22.64 million CGT in 2020.