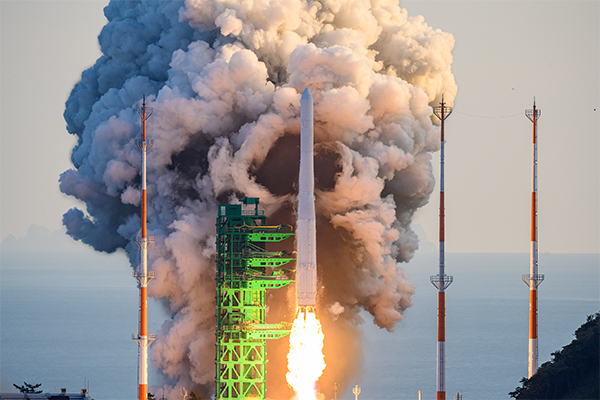 South Korea fell short of making a milestone leap in space program as its maiden flight of its first entirely domestically made rocket KSLV II dubbed Nuri failed to put a dummy payload into orbit.

The success rate of a new rocket in the first attempt is typically at 30 percent.

Only six – the U.S., France, China, Japan, and India – so far have successfully flown an over 1-ton satellite into orbit without outside help.

The space launch vehicle carried out its three-stage mission to arrive at the destination 700 kilometers (434 miles) above the Earth, but failed to place the 1.5-ton dummy payload into orbit as it ran out of fuel and lost speed about 15 minutes after it blasted off from the Naro Space Center in Goheung, 473 kilometers south of Seoul, at 5 p.m., according to the Korea Aerospace Research Institute (KARI).

The first stage or the core booster and the second stage successfully separated and fell into the sea. The third stage was separated but failed to deliver the payload into orbit.

The blastoff of a 47-meter-tall rocket soaring into the air was watched live by the nation including President Moon Jae-in.

“We did not fully reach the goal. But we have made a credible achievement in the first launch,” said Moon in a briefing at the space center.

The 200-ton Nuri rocket was South Korea’s first space vehicle entirely designed and built by Koreans through 11 years of work and cost of 2 trillion won ($1.8 billion). Korea had succeeded in launching its first Naro space rocket in 2013 with the help of the first-stage Russian launch vehicle.

The fully assembled Nuri was carried out from the hangar to be erected at a launch pad for liftoff on Wednesday and was connected with umbilicals for the supply of liquids, gases and electric power.

After full inspections into fuel and electrical systems, fuels and oxidizers begin to be injected about 4 hours before launch. When all devices remain in a normal state and weather conditions are fine, an automatic launch operation starts 10 minutes before takeoff.

Korea would be testing out the space launch vehicle with a dummy payload again in May 2022 after study on the failures of the first launch.

By Lee Sae-bom and Minu Kim