Korea pitches to Thermo Fisher to build production base in Korea
Date
2022.05.02
Views
43 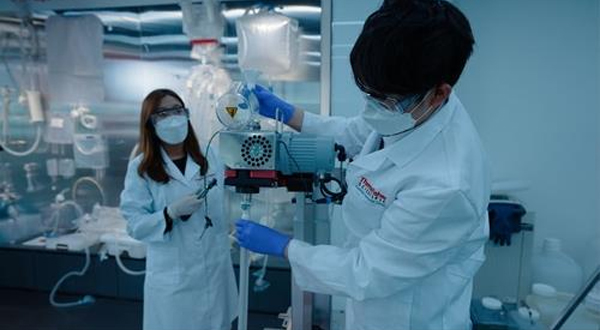 Seoul has gone to draw investment from Thermo Fisher Scientific, an American supplier of scientific instrumentation which pledged $650 million to expand global capacity in vaccine material production without specifying the location.

Yeo Han-koo, the minister for trade, visited the company’s bioprocess design center in Songdo, in the west of Seoul, to pitch Korea’s potential and policy to become a vaccine hub.

Thermo Fisher is a multinational life science firm with 80,000 employees in 60 countries around the world. It produces core materials, such as biohazard disposal bags and cell culture media, which are in solid demand amid the pandemic.

After establishing its Korean operation “Fisher Scientific Korea” in 1994, the company has conducted various investments. It opened the bioprocess design center for bioresearch and bioengineering in July last year and set up the bioprocess supply center to support the region’s bio manufacturers in January this year.

Last year, Thermo Fisher vowed to build new production bases for vaccine materials in North America, Europe, and Asia with an investment of $650 million. It is yet to decide on the locations.

“The United States and South Korea have closely collaborated based on the U.S. vaccine technologies and Korea’s production capabilities,” the minister said in the meeting. He also emphasized the government attracted investment from Cytiva and Sartorius last year in an endeavor to foster a vaccine hub in Korea.