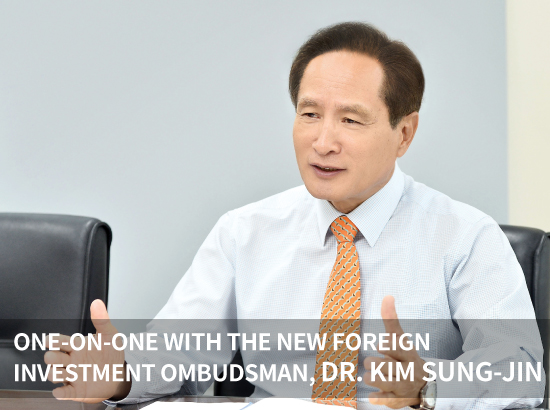 KOTRA Express sat down with Dr. Kim Sung-jin, the new Foreign Investment Ombudsman,
to hear more about his experience with FDI and his vision for foreign investors in Korea

You’ve been engaged in important government affairs while serving in various public posts over a long period of time. What has led you to take this position as the new Foreign Investment Ombudsman?

I was commissioned by President Moon Jae-in as the Foreign Investment Ombudsman on August 20 and I now feel a great sense of responsibility. I was involved in foreign investment and trade affairs in the then Ministry of Finance and Economy (now Ministry of Economy and Finance), and also served as the deputy minister for international affairs and the administrator of the Public Procurement Service.

I’ve also dedicated myself to scholarly work on policies while working as an advisor and a visiting fellow of the Korea Capital Market Institute and an adjunct professor at Soongsil University. Such experience might have brought along the expectation that I could utilize my problem-solving skills while acting as a liaison between the public and private sectors to successfully support foreign-invested companies.

I’ll spare no effort to improve the business and investment climate in Korea and resolve any grievances faced by foreign companies here.

Can you elaborate on your work in foreign investment affairs during your time at the Ministry of Finance and Economy?

In the early 1980s, the Korean government pursued liberalization of the capital market as part of its open market policies and thus, widely opened up its doors to receiving foreign direct investment.

As deputy director, I was taking measures to reform the legislation mentioned above by amending the laws and regulations.

In the early 1990s, I was dispatched to the UNCTC* (now UNCTAD) in New York for two years to study in-depth the FDI policies of different countries. In 1996, I was tasked with holding negotiations in the finance and investment sectors for Korea’s joining of the OECD, widening our doors to foreign investment.
*UNCTC, United Nations Center on Transnational Corporations

Later on, while serving as deputy director general of international finance, I visited major cities in the U.S. to attract investment to Korea as a member of the “Korea Caravan,” along with AMCHAM and the Korea Economic Institute (KEI). Also, while working as director general of economic cooperation and deputy minister for international affairs, I was in charge of foreign investment affairs, continuously engaging in the Foreign Investment Committee and the KORUS FTA negotiations.

Today, the Korean Ombudsman System is garnering international attention. Can you tell us about the system and the reason behind such interest from the global community?

The Foreign Investment Ombudsman System was introduced in October 1999 to resolve the difficulties of foreign-invested companies and provide efficient aftercare services. Now, there are seven specialists, or “Home Doctors,” who support the Ombudsman in resolving the grievances of foreign companies. Korea was actually the first country to institutionalize the Foreign Investment Ombudsman. Now, our system has earned a reputation for preventing conflicts between the country and investors in advance, which many countries, including Kazakhstan, Russia and Brazil, are benchmarking.

I think the Ombudsman system plays the role of the tribunus plebis back in the days of the Roman Republic, especially for foreign investors. For those facing difficulties in dealing with the government in an unfamiliar country, the Ombudsman System is here to listen to their inconveniences experienced while doing business in Korea. I’ll be a reliable partner and supporter in coming up with solutions by viewing the problems from their perspectives.

How do you assess the current status of Korea’s FDI?

Korea, having the world’s 11th largest GDP, is located in the center of Northeast Asia, a region with an enormous economy. Our DRAM, display, chemistry and steel industries are the most competitive in the world, and we also possess a dynamic domestic market, which makes us an optimal global test-bed.

However, we face some challenges as well. Low birth rates and population ageing are undermining economic dynamism while unemployment has become a serious national issue. Another challenge for us involves easing heavy regulations.

I expect our investment environment to evolve with the government’s ongoing efforts to innovate such regulations.

Why is foreign investment important for Korea’s economic growth?

FDI is proved, both theoretically and empirically, to be integral to the economic growth of a nation. Even China, which has become the second-largest economy in the world, would have never been able to accomplish its remarkable growth without its 1979 policy for openness.

Korea has also achieved the “Miracle on the Han River” by choosing the path of export-driven development strategy. This demonstrates that industrial competitiveness can be enhanced through competition. Foreign investment, together with capital inflow, can strengthen our industrial competitiveness through competition and technology transfer, and thus, contribute to our economic development. Also, foreign investment plays a crucial role in creating jobs, one of the biggest challenges of our economy.

Please tell us about your vision and goals going forward as the new Foreign Investment Ombudsman.

Next year marks the 20th anniversary of the establishment of the Foreign Investment Ombudsman System. Now, with the system in its mature stage, we will continue our efforts to view all situations in the perspectives of foreign investors, effectively resolve their grievances and create a more favorable business environment. By doing so, I would like to let the world know that Korea is a reliable place to do business.

Currently, the Korean Peninsula is on the path toward peace-building. As tensions between the two Koreas have started to ease and the North is now opening up its market, there will be a growing need for massive capital for the development of North Korea.

However, it’s hard to expect international financial institutions to pour great amounts of capital into North Korea from the very beginning since there is still substantial country risk in terms of investing in the North. The more realistic route would be for those who have already been successful in doing business here in South Korea to possibly become the front runners in investing to the North.

Accordingly, I would like to do my part as Ombudsman to provide effective aftercare services to foreign-invested companies in the South and thus help them pave the way for investing into North Korea in the future.