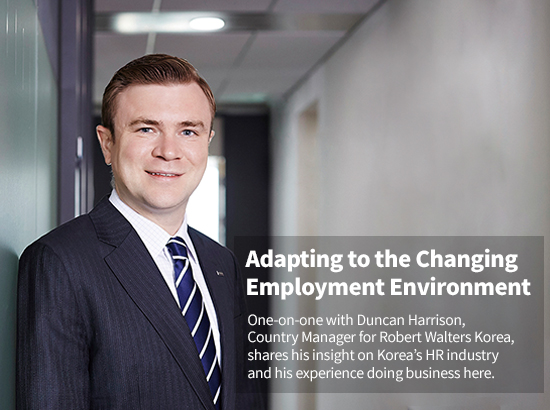 Robert Walters Korea, a leading foreign global recruitment consultancy, has continued to grow under Harrison’s leadership, with 2018 being the fifth successive year of double-digit revenue growth. Delivering insight on job market trends and reports on key recruitment, the company serves as a pioneer in the bilingual recruitment industry in Korea.

KOTRA Express met with Harrison to find out more about Korea’s HR industry and his experience doing business here.

Please tell us about Robert Walters and its history. What kinds of services does the company offer to its customers?

Globally, we were established as an office in 1985 in London, and have expanded fairly rapidly since then. We moved into Korea in 2010, so next year will be our 10-year anniversary. I myself moved here from the Japan office in 2014, so this July will be five years for me in Korea in this position.

In terms of our services, our clients are predominantly multinational companies. We do work with some Korean companies that usually require English speaking candidates, but about 80 percent of our clients are multinationals. Essentially, what we specialize in is finding Korean professionals that speak English and have prior experience working in a multinational organization. Our specialty is in mid- to senior-level agreements, so we don’t really work with entry-level positions or anything too junior.

Structure-wise, we have different teams with their own areas of specialization. We have two teams for tech, and one each for the following: consumer and retail, chemical, healthcare, automotive and semiconductor, industrial, finance and accounting, financial services, and HR. Each of those teams are made up of a manager and consultants, who are 100 percent specialized in that area; so, when you need to recruit, for example, an accountant, you’d speak to our accounting team and they would really know what they’re talking about and are able to introduce qualified candidates quickly as a result. They’re either former accountants or have good knowledge on their respective fields.

Why did Robert Walters establish a branch in Korea? What are the advantages of doing business here?

I came here a few years after the Korea branch was established in 2010, but we had quite a big presence in the region at the time. We were rather big in Japan and Hong Kong—some of the major Asian hubs—and we were getting lots of requests from our clients for positions in Korea, but we were having to turn them down since we didn’t have an office here and weren’t specializing in recruiting for Korean candidates. In 2009, we started visiting Korea and spoke with clients here, did our research, then found out that it could be a pretty good market for us. We finally set up the office in 2010 with just four people, and over time, it has grown and evolved into what it is today.

Korea’s main advantage is its highly skilled and talented workforce. The education and skill levels are very strong—there’s a really high percentage of candidates, especially those in their 20s and 30s, with high levels of English. I was in Japan for seven years prior to Korea, where it can actually be very challenging for companies to find qualified bilingual candidates. Overall, it’s generally not as difficult in Korea in terms of finding candidates with the right skill set and strong enough levels of English. I think the main advantage that Korea particularly has over Japan and China is the workforce possessing high English levels.

How is Korea’s HR industry different from that in other parts of the world?

Also, in the UK, it’s almost a given that when you look for a new job, you do so through a recruitment agency; this would almost always be your first option to find employment. The U.S. is somewhat similar, but in Korea that’s not the case. A high percentage of people still find jobs through their networks, alumni and connections, so that’s a market opportunity for us to increase the percentage of people who find jobs through agencies like us.

What are some of the current trends you are seeing in terms of human resources in Korea?

The overall key trends that we are seeing now is, as I mentioned, the big increase in FDI as well as in the number of foreign companies entering the market.

As for recruitment in Korea and globally, it’s currently characterized as every company, no matter which industry, is going through a period of change, which is almost unprecedented. This is really affecting the recruitment market, so we work on a lot of positions now that didn’t even exist two years ago. For example, we’ve got many requests from our clients at the moment for digital transformation specialists, who work to consult companies in boosting their digital competitiveness. This position didn’t even exist a couple of years ago, but now, while we’ve got massive demand from our clients for these specialists, the supply of suitable candidates is limited. Another example is big data specialists, since every company now is looking to utilize the massive amounts of data out there that can be advantageous to the company. Not many companies know how to utilize data, so we have a high quantity of requests from our clients right this moment for big data specialists, but again, there is a lack of suitable people with that skill set.

More specifically to Korea, it is getting increasingly competitive to hire the top talent; there are a lot of foreign companies coming in to the market, FDI has gone up, and the nature of positions are changing very rapidly. All this has resulted in more companies hiring more positions, some of which have a very limited supply of candidates and has led to candidates from certain sectors seeing large salary increases when changing positions.

Additionally, across the board, companies are looking at measures to cut costs, because their costs have generally gone up last year with changes including the increase in minimum wage. To counter that, there’s another newly emerging position we’re working on called smart factory operation consultants. This is a big area in Korea and there’s always new technology here, which can help factories run in a more automated way. Everything’s changing really rapidly.

Were there any challenges your firm faced while doing business in Korea?

As a foreign company, during recruitment, the most important thing we can gain is trust. We need to gain trust from the company as well as the candidate. I think we have to work very hard at this in a country like Korea, because recruitment is very relationship-heavy and as a foreign company, perhaps there’s a bit more suspicion on what our motives are in doing what we do here, and why we’ve set up this organization. So, we have to work very hard at building up people’s trust and showing them that we can add value for companies and the job seekers.

How can Korea become a more ideal business environment for foreign companies like Robert Walters?

There are already many advantages of doing business here: it’s strategically located, it’s very close to China, and it has a very talented workforce, so there are already lots of plus points. I feel more companies would find it more ideal and it would also benefit Korea if the workforce could become more diverse. For example, we don’t see as many females here in senior-level management positions, and the percentage is quite low for the female participation rate overall, so that’s definitely one area. In Japan, we recruit for exactly the same positions as we do in Korea, and about 50 percent of all the placements we make in Japan are for females, while in Korea, it’s about 32 percent.

Conversely, on the same lines, not just in terms of gender, but Korea could benefit from opening up a bit more to non-Koreans, to foreign workforce. I think a specific challenge for Korea is that in the next 10 years, the population is going to decline quite rapidly, and there aren’t going to be enough experienced workers to fill positions, which is necessary if the country is going to remain competitive. Referring again to Japan, its population is already decreasing, so we’re seeing active measures there to challenge that by getting more females back into the workforce and increasing the number of foreign workers. In Japan, 23 percent of all placements we make are non-Japanese people, while in Korea, it’s about 2 percent that are non Koreans.

What Korean companies/government agencies do you work with to strengthen your business partnerships?

What are some future plans that Robert Walters has when it comes to doing business in Korea and in Asia?

In the past, we’ve looked into the idea of getting an office in other areas like Busan or Ulsan, where we’ve got big manufacturing clients, but since Korea is not geographically a huge country, we prefer to have everything centralized in Seoul. Our consultants visit those areas from time to time and meet the candidates and clients down there. So, although we won’t be expanding geographically, we’ll expand by diversifying the types of positions. For example, last year, we added three new teams. One is just for recruiting developers in the tech space; another one is in the B2B side where we’ve added an automotive team; and chemical and healthcare used to be one big team, but then once we get more experienced consultants, we can increase specialization in those areas. Comprehensively, we plan to add to our headcount this year and in the coming years by adding more staff and becoming more specialized.

Although we’re a British company, almost half of our revenue as a company is from the Asia Pacific region, which proves that this region is a massive growth area for us and will continue to be so.

What is Robert Walters doing to rise above the competition in Korea’s HR sector?

Recruitment is a fiercely competitive industry. Here in Korea, there are about 5,000 registered recruitment agencies, so we definitely have to be competitive.

First and foremost, we try to hire the very best people. We don’t have a product—we’re not going out to sell something—so everything for us is really in the quality of the people we hire. We interview a lot of people and have quite strict requirements—less than one in 10 people interviewing with us gets the job. So we are fairly stringent with the recruitment process, and we try to hire the very best quality people.

Then, we try to add as much value to our clients and candidates as possible. We host a number of networking events on an annual basis. For example, in January, we invited about 140 HR clients to the Four Seasons Hotel and gave a thorough presentation about the recruitment market. We hold numerous industry lunches and networking sessions with renowned speakers, an annual end-of-the-year Christmas party, and host a variety of industry workshops and training sessions for our candidates. We try to hold a lot of general, as well as industry-specific networking events to add as much value as we can to the people we work with.

As a company, we prefer to focus on “quality over quantity.” For instance, our consultants are never allowed to send a client a resume unless they’ve interviewed the candidate face-to-face in both English and Korean; we try and offer as thorough a service as possible. We aim to build relationships rather than just send out random resumes, which we believe will engage job seekers and companies to do business with us.