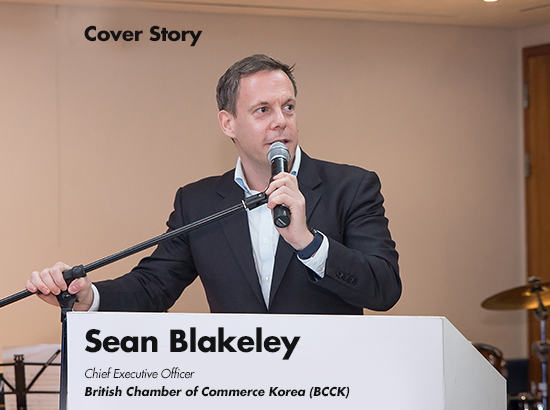 The British Chamber of Commerce in Korea (BCCK) is an organization that represents the business interests of its members in Korea. The Chamber embodies a broad spectrum of British, international and Korean companies, who share significant commercial interests in the country. The BCCK also works together with the British government to promote British trade, commerce and investment in Korea and to encourage business development between Korean and British companies.

Sean Blakeley is the Chief Executive Officer of the BCCK. A long-term resident of Korea, he has worked as director of business development with a Korean publishing company and as managing director of a British consulting company prior to joining the Chamber in 2015. During his career, Sean has consulted for companies across a broad range of sectors including consumer electronics, retail, consumer goods, and F&B. Blakeley speaks Korean fluently and has completed a master’s program at Seoul National University in International Relations & Political Economy as a government scholar.

Read more about Blakeley’s experience to gain insight into Korea’s business environment and the opportunities it offers to not only UK companies, but all foreign companies interested in investing here.

Can you tell us a little bit about yourself? What brought you to Korea?

I have been in Korea for over 15 years. I came initially to work and then studied here as a Korean government scholarship graduate student and then continued to stay in the country.

I have been working in the market entry, market access space for nine years, having run a British consultancy firm for more than three years and now the Chamber for close to six years.

What about Korea’s history, economy or culture appeals to you the most?

At first, I was very interested in Korea’s unique political and economic history, having majored in both History in my undergraduate studies at Leeds University in the UK and later International Relations at Seoul National University.

The country’s amazing ability to develop so rapidly continues to be superbly impressive. Having now studied, worked, lived and married here with a beautiful wife and two wonderful children, my family and the culture is what keeps me here—family oriented and respectful.

What are some advantages of doing business in Korea?

Korea has many advantages. Geographically, located between China and Japan and not far away from emerging markets in Southeast Asia, Korea can be a great location as an Asian hub for businesses.

Also, the domestic market, despite only consisting of around 50 million people, is appealing for many B2C companies wishing to sell their services or products into the country as well as B2B companies who can partner or sell into many of the large conglomerates based here.

In addition, Korea has a good rule of law and government-affiliated institutions such as KOTRA which seeks to support businesses entering the market.

Lastly, but most importantly, Korean people are a huge asset for those businesses looking to hire in the country. Intelligent, driven and committed, people here can really help companies achieve their targets.

What are the current trends you’re seeing in Korea’s business environment?

We are seeing companies outside of the traditional consumer product categories look at Korea as an important strategic market. Whether it is in legal or financial services, energy, or digital areas, companies are now looking for partnerships and customers in the market.

How interested are companies from the UK in investing in Korea and what sort of sectors are they most interested in?

The UK is the second largest investor in Korea from Europe after Germany. British companies in the consumer products, pharmaceutical and petrochemical space have traditionally been those interested in investing in Korea, but increasingly those in the legal or financial services, energy, or digital areas are looking for partnerships and customers in the market. 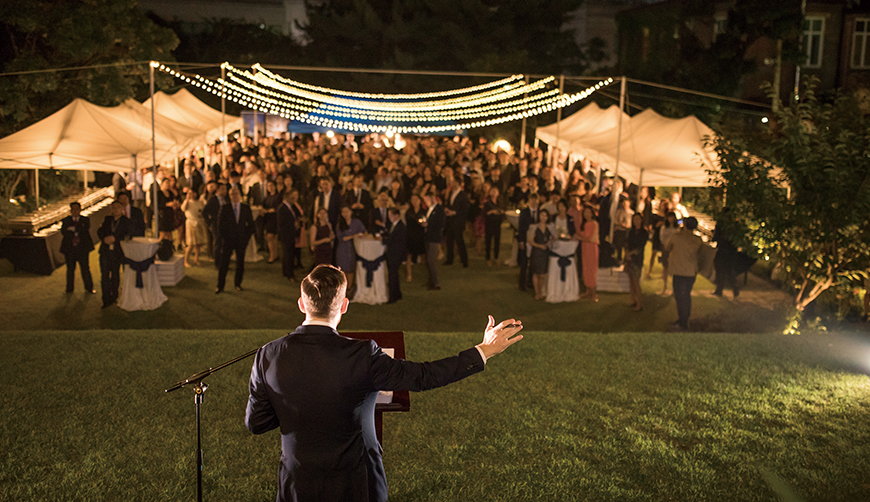 What kinds of opportunities do Korea's new policies such as the Green New Deal and the Digital New Deal offer to British companies and potential investors?

UK companies who have core technologies in the energy and digital space can benefit from Korean government’s Green New Deal. As an example, those in the renewable energy space such as Ceres Power, a BCCK member company, signed a technology transfer and joint development agreement with Doosan Fuel Cell in September 2020. According to the agreement, the UK company, which is a global leader in fuel cell and electrochemical technology, and Doosan Fuel Cell, a market leader in stationary fuel cells, have agreed to a license agreement worth 30 million pounds over 3 years.

On the Digital New Deal side, artificial intelligence (AI) presents opportunities for UK’s companies in the digital space as Korea is ranked only 14th in the world in terms of AI research competitiveness according to a report published by the Software Policy and Research Institute of the Ministry of Science and ICT and is looking to rapidly develop this sector—collaborations with UK companies can help this advancement.

In fact, the BCCK is currently working with a UK-based synthetic data generation toolset developer for training computer vision AI algorithms to help license its solution to Korean conglomerates and there has been a high level of interests from multiple companies in the solution.

What advice would you give investors/companies from your country seeking to do business here?

Remember that Korea is not Japan or China and deserves its own time and attention. Find the right partner, hire competent people and build a short-, mid- and long-term strategy to succeed in the market.

What kinds of support do investors from the UK want from Korea?

Investors always value predictability and transparency. As such, investors like to have support from the respective governments of the markets they enter which help to make sure that policies are clear, standards are akin to those set elsewhere in the world, governance which is consistent and a business environment which is fair. The more that Korea can ensure these pillars are established, the more investment it will attract and the more it can compete with other hubs in the region. 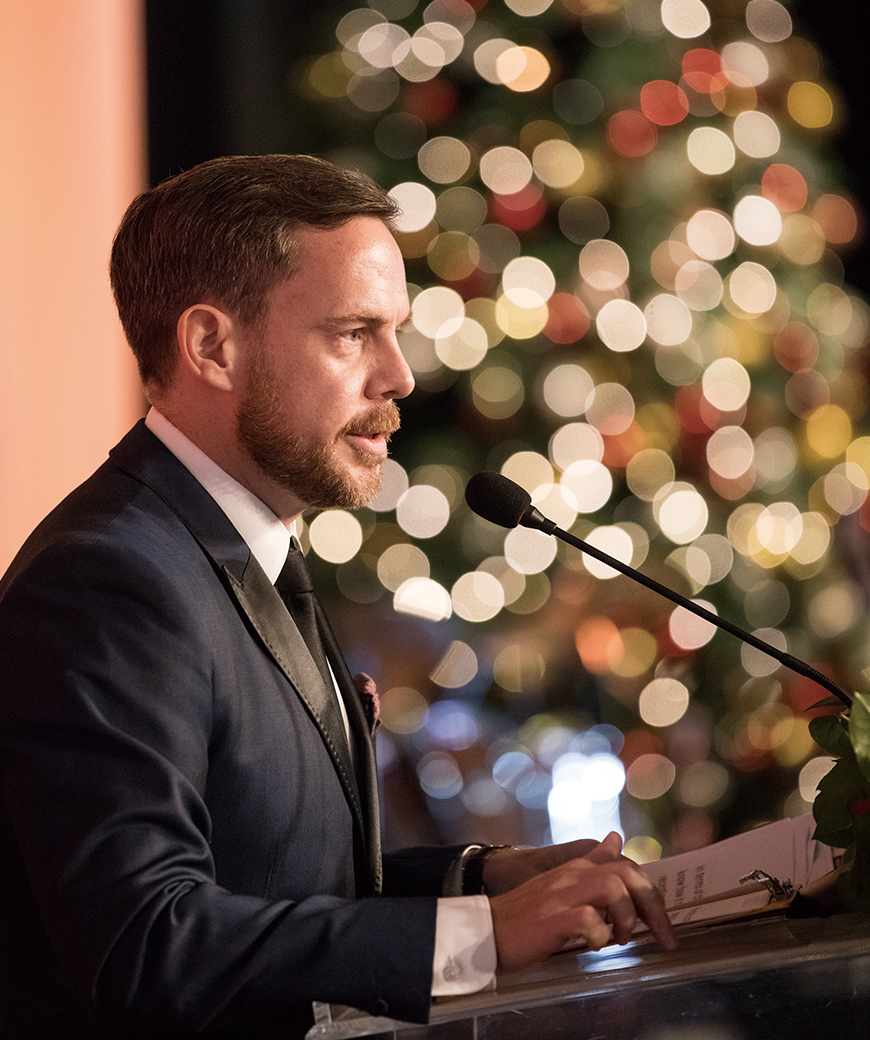 What are some of BCCK’s plans for strengthening Korea-UK business ties? Any special goals for this year?

The BCCK is a service delivery partner of the British government, and as such, we support many companies in the UK from a variety of industries who are considering investing in Korea. We proactively promote these services despite the obvious challenges that exist at present and will continue to do so.

We are also forming a member-based committee to draw up our priorities for discussions which will soon follow between the British and Korean government on a bilateral Free Trade Agreement which will replace the previously agreed continuity agreement—a critical way through which Korea and the UK can facilitate greater trade between both countries. Whilst we have continued to engage our members through virtual events, our goal and hope in Q3 and Q4 will be to hold offline events which will allow us to bring them together once again.