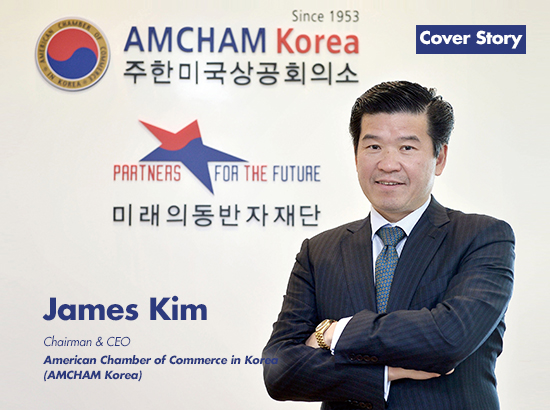 Invest Korea interviews James Kim, Chairman & CEO of the American Chamber of Commerce in Korea, to hear more about his experience doing business here and the opportunities Korea has to offer for potential foreign investors and foreign-invested companies.

The American Chamber of Commerce in Korea (AMCHAM Korea) was founded in 1953 with the mission to expand the vital trade and investment partnership between the United States and South Korea through the active development and promotion of commercial, economic and cultural exchange. AMCHAM is the largest foreign chamber in Korea with member companies with diverse interests and substantial participation in the Korean economy.

James Kim is Chairman & CEO of AMCHAM Korea. Prior to AMCHAM, Mr. Kim served as Chairman, CEO and President of GM Korea. Mr. Kim is a Korean-American who is passionate about promoting the commercial interests between the two countries. At GM Korea, Mr. Kim was responsible for the total operations with 17,000 employees (sales, manufacturing, distribution and design) in Korea. Mr. Kim also had oversight responsibilities with GM’s joint venture operations in Uzbekistan. Mr. Kim joined GM Korea from Microsoft Korea, where he had served as Country Manager and CEO. His previous roles include CEO of Yahoo! Korea and Asia Regional Vice President of Overture (a wholly owned subsidiary of Yahoo). Prior to Yahoo, Mr. Kim worked predominantly in the United States, where he was the Managing Partner at Palisades Advisors, based in New York. Prior to Palisades, he held other positions including CEO at Corcoran.com, CEO of Vivien International and National Marketing Manager at AT&T. Mr. Kim also serves as Independent Outside Director of Almonty Industries (TSX: ALMTF) as well as Advisor to ICONLOOP, a leading blockchain enterprise technology company based in South Korea. Mr. Kim appears in major Korean and global media as an expert in Korea and US dynamics.

Mr. Kim holds a Bachelor of Arts in Economics from the University of California, Los Angeles and a Master of Business Administration from Harvard University. As an avid tennis player, Mr. Kim serves as an official “Wilson Brand Ambassador.” Mr. Kim lives in Seoul, Korea with his spouse and has two grown children.

Read on to hear more about Mr. Kim’s experience doing business in Korea and the opportunities the country can offer to potential foreign investors and foreign-invested companies.

Can you tell us a little bit about yourself?

I immigrated to the U.S. at the age of eight and returned to Korea in 2005 after getting my MBA from Harvard Business School. I was living in New York when I received “the” phone call for an opportunity to turnaround Overture Korea, a division of Yahoo. I was excited for the opportunity to return to my home country for this type of position. However, there were many unexpected challenges, and I received some criticism regarding my lack of Korean language skills, existing network, Korean school ties and the specific knowledge of the Korean business environment. But I stuck with my management philosophy and tried to do the right thing for my company, and I am proud of what I have accomplished over the years. I served as CEO of Microsoft Korea and GM Korea before taking on the position of full-time Chairman & CEO of AMCHAM in 2017. My hope is to remain in Korea for as long as I am able to perform my job.

What about Korea’s history/economy/culture appeals to you the most?

Korea is a dynamic place to live and work. There are people from all over the world coming to Korea to pursue new opportunities and it has been amazing getting to know many of them through AMCHAM.

As Korea continues to grow into the business hub of Asia, I believe the culture and business will become more diverse and exciting. Not to mention the incredible ease of living - everything is fast-paced, which means no long lines and quick and efficient service.

What are some advantages of doing business in Korea?

AMCHAM has over 800 corporate members and affiliates who would not be here if Korea were not a great place to do business. I am often asked about Korea’s strength as a business environment.

Korea’s IT infrastructure and human resources are among the best in the world. It has the world’s most highly educated population and is ranked number one in innovation by Bloomberg’s innovation index.

Korea has highly sophisticated consumers, making it a great testbed for consumer products and a great launching pad to reach the rest of the Asia Pacific region.

Unlike many of its competitors, Korea is a strong democracy with a free press, which is an underrated but important factor for many U.S. companies.

Korea excels in macroeconomic stability thanks to the high competence of the Korean government.

All of these factors are why so many American companies are investing and succeeding in the country.

What are the current trends you’re seeing in Korea’s business environment?

The COVID crisis has brought all businesses a step closer to the Fourth Industrial Revolution by accelerating the “digital transformation.” AMCHAM also found new ways to bring value to our members by providing vital up-to-date information, government advocacy and access to timely virtual meetings. Since last year, we have held over 100 online events.

ESG (Environment, Social & Governance) has emerged as a key criteria to measure the broader impacts of business activities. AMCHAM launched an ESG Committee this year under the leadership of 3M Korea, Procter & Gamble Korea and Dow Korea to lead the discussion on ESG among the global and local business community.

Diversity and inclusion, especially women’s leadership, is another major priority for businesses. I am proud that this year’s AMCHAM Board of Governors has the largest number of women leaders ever, including the country managers of FedEx, Amway, Coca-Cola, Kelly Services, Nike, Procter & Gamble, Citibank and Hawaiian Airlines.

How interested are companies from the US in investing in Korea and what sort of biz opportunities/sectors are they most interested in?

I am seeing more interest than ever from U.S. companies in investing in Korea across all industries. A good example is The New York Times, which recently located part of their Asia office in Seoul. Another is Almonty Industries. This company is investing more than $100 million to re-open a mine that will provide the world’s second-largest source of tungsten, helping to diversify supply chains for this vital natural resource.

In fact, this year, a record number of the AMCHAM Board of Governors are also regional heads of Asia for their companies, including Disney, Johnson & Johnson, Visa, Delta, Weber Shandwick, Amway, and Cytiva.

As for the bridge between the U.S. and Korean government and private sectors, AMCHAM will play a key role in helping Korea seize this opportunity to make the country a top destination for regional HQs. 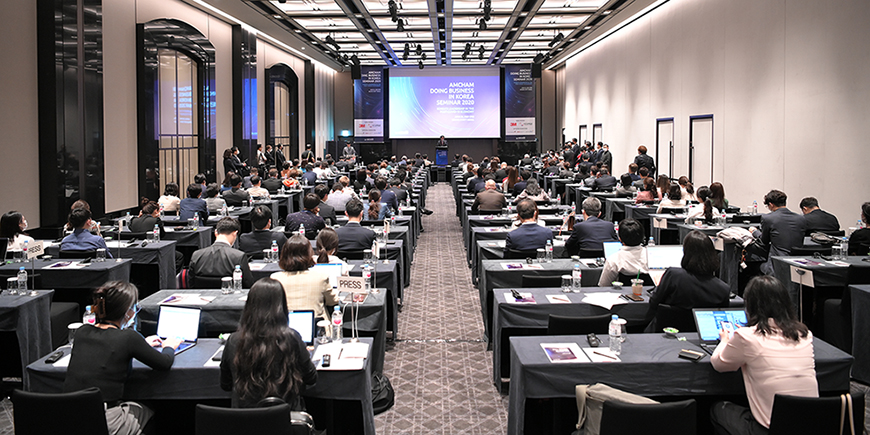 What kinds of opportunities are Korea’s new policies such as the Green New Deal and the Digital New Deal offering to US companies or potential investors?

The Green and Digital New Deals demonstrate that the Biden and Moon Administration share a common approach to the challenges we face. We see a strong interest for business as well as public collaboration in Fourth Industrial Revolution sectors, such as bio-health, cloud computing, cybersecurity, and green energy.

What kinds of support do investors from the US want from Korea?

Korea can increase its economic dynamism make itself even more attractive to foreign investors by harmonizing with global standards. Korea’s corporate and individual tax regime could be made much more competitive compared to its peer countries in Asia. More flexibility could also be introduced to labor, and compliance costs could be reduced to make Korea an even more attractive place to invest and do business.

I appreciate that the Korean Government has recognized the importance of FDI inducement and shown that they value stakeholder input from the international business community. I am especially grateful that AMCHAM has been able to work closely with KOTRA and Ombudsman Kim Sung Jin to optimize Korea’s business environment.

What are some of AMCHAM’s plans for strengthening Korea-US business ties? Any special goals for this year?


AMCHAM will take the lead in policy coordination between the public and private sectors of both countries. The U.S. business community can contribute valuable expertise, technologies and investments to achieve both Presidents’ visions.