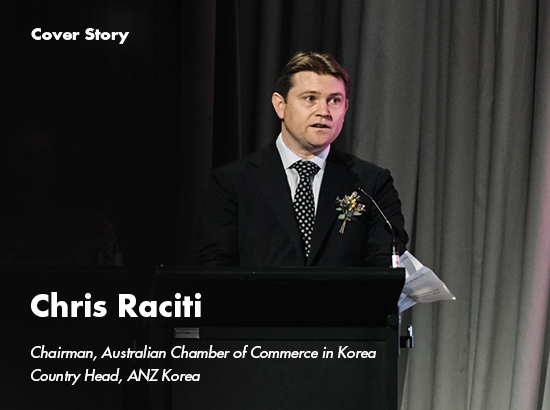 Invest Korea talks to Chris Raciti, Chairman of the Australian Chamber of Commerce in Korea (AustCham Korea) and Country Head at ANZ Korea to hear more about AustCham’s activities in Korea and his experience doing business here.

October 31st marks the 60th anniversary of the establishment of diplomatic relations between Korea and Australia in 1961. Since then, the two countries have greatly deepened their trade and investment ties through various cooperative efforts over the years. As the peak body representing the Australia-Korea business community, the Australian Chamber of Commerce (AustCham) in Korea’s mission is to foster a stronger and more diverse relationship with Korea by focusing on advocacy, representation, access, and networking through information sharing initiatives.

Each year, the Chamber hosts around 40 events and initiatives of behalf of its 260 members, including government briefings, ministerial receptions, networking nights, industry roundtable discussions and plays an important role in providing CSR opportunities for Australian corporations in Korea.

As the Chairman of AustCham Korea, Chris Raciti is responsible for deciding the strategic direction of the Chamber and acts as a key representative of the Australia-Korea business community for both Australian and Korean government engagements. Having worked in Asia for over 16 years, 5 of them in Korea, Chris is well versed in the difficulties faced by foreign companies seeking to navigate the Korean market and always ready to share his insights with the community.

Through his work with ANZ, Chris has gained extensive experience in financial services within the region, being currently responsible for growing the ANZ’s Korea franchise, both in Korea and also with Korean corporate and financial institutional relationships across the region. Prior to his relocation to Seoul from Hong Kong, Chris held senior roles in ANZ’s market leading Loan Syndication and Structured Finance business. He has been with ANZ for circa 20 years, primarily within institutional business in Australia, Korea, Singapore, and Hong Kong.

Read more about Chris’s experience to gain insight into Korea’s business environment and the opportunities it offers to not only Australian financial firms, but all foreign companies interested in investing here.

Can you tell us a little bit about yourself?

Having grown up in Australia, I always had a strong interest in working in the Asian region. My decision to start learning Korean happened at university, while I was completing a double-major in International Business and Commerce at Griffith University in Australia. During my studies, I also undertook 1-year exchange at Korea University, which cemented my interest in both the Korean language and society.

Professionally, I have been working within the institutional banking sector for the last 19 years, initially in Australia, and then in Asia. All up, I’ve been lucky to have a career that enabled me to spend the past 15 years in the region, working in Seoul, Singapore, Hong Kong.

I returned to Seoul in 2017 and am currently the Country Head of ANZ Korea and the Chairman of the Australian Chamber of Commerce. Within the scope of both roles, I remain deeply committed to furthering the growing partnership between Korea and Australia.

What about Korea’s history/economy/culture appeals to you the most?

The conflict of old and new is one thing I find quite fascinating. Korea has a unique juxtaposition between traditional and progressive elements, which you can see in the very landscape of Seoul and also the way that business is conducted here..

With the Republic of Korea being founded in 1948, it is still a relatively ‘young’ nation, but it is also one steeped in a lot of history, and you can see that interplay between rapid economic and social development versus the traditional values, architecture and cultural heritage throughout the country, although it is probably particularly striking here in Seoul.

Additionally, echoing this progressive thread, it is notable that Koreans are such early adopters of new things. Koreans adopt new technology, new information—and they embrace it. This is why you see such rapid change in Korea.

The theme for this month’s issue of IK magazine is Korea’s display industry. As many are aware, Korea’s state-of-the-art technology, IT infrastructure, and top-tier companies such as Samsung and LG are continuously innovating digital products like smartphones and TVs. What would you say are the advantages of doing business in Korea?

The excitement of living in Seoul is definitely reflected in business—making Korea a dynamic and fast-paced business environment. While the ‘palli-palli’ culture may take some getting used to, it means that there is always a strong appetite for business and innovation—particularly given Korea’s strength in the R&D space.

The country’s highly educated and highly skilled workforce, along with high-quality IT infrastructure, are also definite advantages of doing business in Korea. This is further reinforced by shared values between Australia and Korea, as both countries have a strong commitment to democracy and the rules-based order.

Additionally, since Korea is a relatively smaller market than some of its neighbors, such as China and Japan, it offers a great platform for companies to test out their expansion to Asia. This is especially true following 2014, when we saw the Australia-Korea Free Trade Agreement come into force, leading to the diversification of two-way trade away from the historical dominance of commodity-based Australian exports to Korea.

Sustainability is a key topic for economies and companies all over the world. What are the current trends you’re seeing in terms of sustainability or green finance, and how are they shaping the business environments in Korea and Australia?

In the hydrogen space, it is notable that most Australian state governments have a hydrogen strategy, and the Korean Government is expected to release a detailed independent feasibility study for international supply chains later this year, building upon its Hydrogen Roadmap. Several Korean conglomerates, including POSCO, Hyundai, and Doosan, have also been investing in hydrogen technology and signing MoU agreements with other industry players, including prominent Australian companies. Additionally, AustCham Korea, the Australian Embassy in the Republic of Korea and the Australian Trade and Investment Commission (Austrade) have collaborated to host several hydrogen engagements, with a similar momentum expected in the coming months.

Yet while hydrogen has been making media headlines, critical minerals are equally important for the green energy transition, as they are a key component to EV batteries powering hydrogen technology. During his recent visit to the Republic of Korea, Australian Minister for Trade, Tourism and Investment, the Hon. Dan Tehan MP, met with several key stakeholders from the critical minerals sector, reflecting the commitment for the two countries to promote mutual investment, joint technology development, and cooperation through the recently established bilateral critical minerals working group, established under the Joint Committee on Energy and Mineral Resources. Keenly attuned to these shifts, renewable energy, green finance and sustainability have been important areas of focus for AustCham over the last few years. The Chamber has two primary subcommittees, one focusing on Energy, Resources and Sustainability and another on Financial Services, with green finance situated at the intersection of these two industry focus areas.

How can Korea become a better investment environment for Australian companies and investors?

Cultural differences and lack of up-to-date information are probably key hurdles to overcome when doing business or investing in Korea. However, both issues can be resolved by having a good local partner. Facilitating the development of these partnerships and links is something that both the Australian and Korean governments can invest in to deepen the bilateral relationship..

The Chamber likewise places a strong emphasis on information-sharing and relationship-building within our membership, which is in high demand across a broad cross-section of industries.

While the ongoing pandemic has put a damper on some of our planned offline engagements, the Chamber remains committed to continuing to promote Australia-Korea ties and celebrate the depth and breadth of the bilateral relationship.

Working within that we like to call ‘Team Australia’ which includes the Australian Embassy, Austrade and state government representative offices, AustCham we have maintained our momentum in hosting over 40 events to date in 2021, including offline, hybrid and online engagements.

As the Chamber is fundamentally a community-based organization our membership reflects the booming vitality and diversification of Australia-Korea relations. We are pleased to engage with members and partners across a broad cross-section of industries, such as agribusiness, critical minerals, financial services, energy and resources, F&B, education and defense.