Invest Korea talks to Josep Piqué, Honorary Ambassador of Foreign Investment Promotion for Korea, to hear more about his career experience, his aspirations for his time as honorary ambassador, and the advantages of doing business in Korea.

Earlier this year, Josep Piqué was appointed Honorary Ambassador of Foreign Investment Promotion for Korea by the Ministry of Trade, Industry and Energy of the Republic of Korea based on his extensive career experience and expertise in the public and business sectors.

Piqué hails from Spain, where he holds a Ph.D. in Economic and Business Sciences and a Bachelor’s Degree in Law from the University of Barcelona, at which he is currently Head Professor of Economic Theory. He has also been a Senior Economist in the Academic Studies Service of La Caix—known today as Caixabank.

In the public domain, he was General Director of Industry of the Regional Government of Catalonia (1984-1986) and later became Minister of the Government of Spain (1996-2003), where he managed the Industry and Energy, Foreign Affairs and Science and Technology portfolios. He was also a spokesperson for the Government (1998-2000), deputy senator in the Spanish Parliament (2000-2007) and deputy in the Parliament of Catalonia (2003-2007).

In the private sector, he describes the first stage (1986-1996) of his time with Spanish chemical group ERCROS, of which he was President and CEO from 1992 to 1996. In the second stage, spanning 2007 onwards, he occupied various positions of responsibility. Furthermore, he was President of Vueling and the Vice President and CEO of OHL Group. Piqué is currently the chair of ITPAero, and the Director of Amadeus, SEAT, VW Navarra and Atrys Health. In the non-business sphere, he serves as President of Círculo de Economía and Vice President of Círculo de Empresarios. Today, he presides over the Ibero-American Business Foundation and the Toledo International Center for Peace.

Read on to learn more about Piqué’s career experience, his aspirations for his time as honorary ambassador, and the advantages of doing business in Korea.. 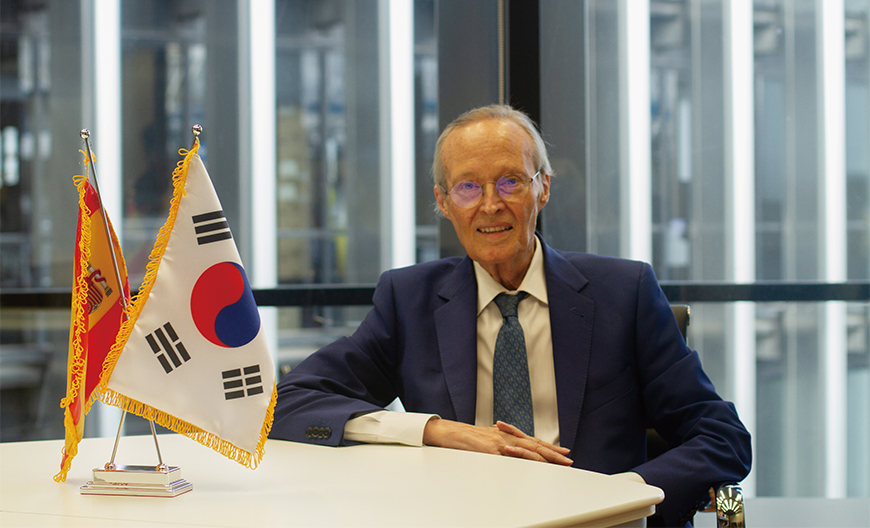 How did you become interested in Korea, and what are the historical, economic, or cultural qualities of Korea that appeal to you the most?

It is an admirable country for its resilience to historical vicissitudes, its ability to overcome all challenges and the enormous quality of its human capital. Korea and Spain share a similar path in their recent historical, political and economic trajectory. However, Spain admires Korea’s technological capabilities and the excellence of its educational system.

Can you tell us about why you founded the Chamber of Commerce Spain-Korea? What are the major functions of the Chamber?

It was a joint initiative with the then-Ambassador Oh Dae-sung, emerged by the need for discovering new areas which would foster, from the civil society, the excellent bilateral relationships between both countries.

The Chamber's objectives are to promote this relationship in the commercial, business, technological and investment domains in coordination with the public bodies of both governments.

Based on your participation in the Korea-Spain Green-Digital Business Forum and MWC 2021, what do you think are the advantages of doing business in Korea?

Korea is a country with total legal security, a very high technological level, and an excellent human capital.

It is an open-minded country committed to free trade and multilateralism. Its wide presence in all markets, particularly in Asia, makes it a very attractive platform to invest in.

Furthermore, its interest in South America can be paired with the historical Spanish presence in that region.

We are currently witnessing a restructuring of the global value chain (GVC). In light of this, how do Spanish companies view Korean companies (as partners) and Korea’s business environment?

Events such as the COVID-19 pandemic or the increasing “decoupling” between the USA and China underscore the need for diversified and secure supplies so as to ensure the smooth functioning of the global chains of value. This should be done between allied nations who share the same values, as in the case of Korea and Spain.

The theme for this month’s issue of IK magazine is Korea’s secondary battery industry. What kinds of opportunities do you think are available for companies in your country in this industry or other related fields?

Korea has remarkable power in this industry. On the other hand, Spain is committed to a very ambitious agenda in terms of the digitalization of our economy within the European framework. Thus, the possibilities of collaboration are quite extensive and can be very beneficial for companies in both countries. Joint ventures, partnerships, cross investments, or technology transfer agreements are good examples of what can be done in this regard.

It is important to be on the lookout for opportunities, and, in the case of Spain, not to lose track of what Korean companies are doing.

Last year, the Korean government announced a multi-billion dollar stimulus package dubbed the Korean New Deal with ambitious plans to foster the digital and green industries. In line with this, do Korea’s new policies related to the Green New Deal and Digital New Deal provide business opportunities for Spanish companies both in Korea and in Spain?

Absolutely. Spain is committed to both objectives, which are those of the European Union. The Next Generation EU funds will be mainly used for digitalization and the ecological/environmental transition. The shift to a greener economy will open up endless opportunities for collaboration between companies of both countries.

On the back of your remarkable career experience as CEO of various companies and in high-ranking governmental posts, what are some of your ideas for revitalizing the business and investment relations between Korea and Spain as Honorary Ambassador of Foreign Investment Promotion for Korea?

Bilateral relations have significantly improved but not nearly enough. We have to take advantage of the new trade frameworks derived from the Free Trade and Investment Agreements, increase mutual awareness and turn to public mechanisms such as KOTRA, who do an extraordinary job in terms of economic revitalization between both countries. The job done by the Chambers of Commerce or ICEX, on the Spanish side, is also quite remarkable.

As Honorary Ambassador of the Republic of Korea, I hope I can bring my experience, my knowledge of both the business sector and the functioning of the public administration. My admiration and affection for the Korean people make this task particularly pleasant and heartwarming. 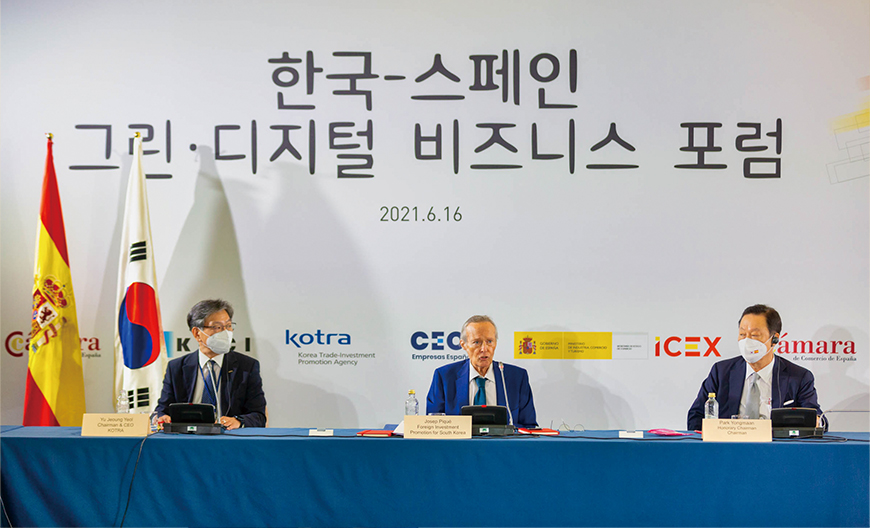