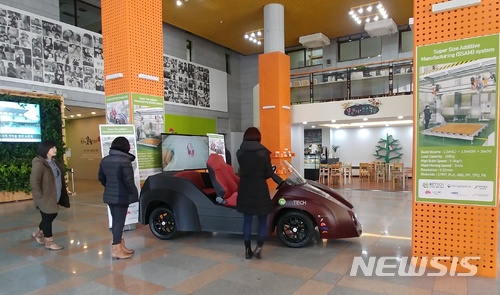 The city of Jeonju, Jeollabuk-do will use a newly developed electric commuter car to advertise the city’s new growth industries. The car is the result of coordinated efforts across the two of the industries: carbon composite and 3-D printing.

On March 4, the local government announced that the “Carbon Material and 3-D Printing-Based Environment-Friendly Commuter Car Exhibition” will be held at the lobby on the first floor of the Jeonju City Council building from March 5 to March 12, 2018.

The exhibition will feature an electric commuter car that was developed with the 3-D printing technology, carbon composites, and other technologies that were locally developed.

Electric commuter cars are gaining popularity as a cutting-edge and environment-friendly option for traveling short distances to and from offices, tourist attractions, or parks.

A video that summarizes the vehicle’s development process will be played on a screen monitor inside the venue, along with promotional banners that are designed to provide visitors with information on the vehicle, its materials, and 3-D printing.

Ms. Choi Eun-ja, the head of the city’s New Growth Industry Division, explained the significance of the event saying: “The newly developed car is an important symbol of the city’s food industry in the future, which will be created through a combination of the carbon sector that the city takes pride in and its 3-D printing sector.”